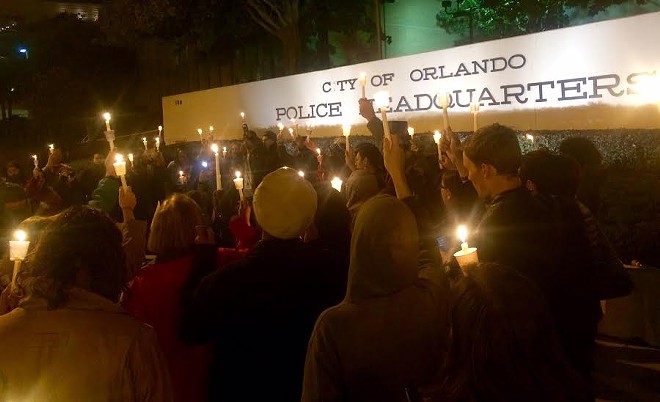 Erin Sullivan
While some cities around the country reported some inconvenient disruptions related to MLK Day, the Black Lives Matter candlelight vigil in downtown Orlando outside police headquarters tonight was quiet. Rather than anger, it reflected sadness, solidarity and hope. People read the final words of some of the most recent victims of police brutality and abuse, including Sandra Bland and Eric Garner, and after a closing prayer, attendees raised candles overhead and joined in a quiet rendition of "We Shall Overcome."

The event was one of many held in cities across the country, designed to distance itself from the more celebratory messages of other Martin Luther King Jr. Day events. Activists across the nation joined in using the hashtag #ReclaimMLK to post images and messages from events that honored MLK by embracing the spirit of civil disobedience and protest the civil rights leader used to push issues of racial equality into the public discourse.

Part of the goal, activists say, is to reclaim the sanitized narratives of MLK's life and actions that dominate discussions of his legacy today. We'll have more reporting on the event in the morning.