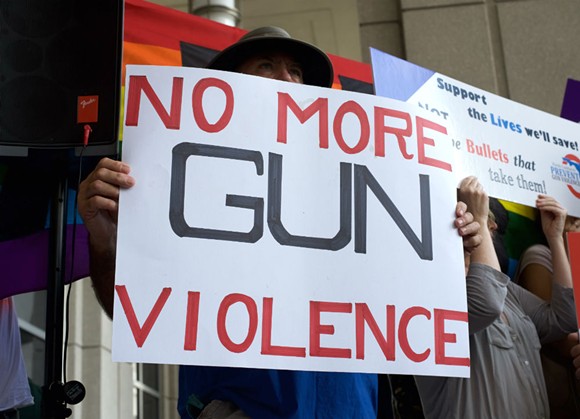 Photo by Monivette Cordeiro
Friday morning, a 17-year-old student at Forest High School in Ocala, Florida, was shot and wounded just minutes before the planned national walkout on gun violence.

One person was shot in the incident, which the Ocala Police Department say occurred at around 8:42 a.m. The shooter, who is believed to be a 19-year-old and not a student, is now in custody.

According to a Marion Public Schools spokesman, the injured student was transported to a hospital after being shot in the ankle. The wound was not considered life-threatening.

No information on the identify of the shooter or a motive has been released, but it is being reported that this is an isolated incident.


RE: SHOOTING AT FOREST HIGH
All schools are on Code Yellow as a PRECAUTION. The shooter is in custody and there is NO THREAT to any other school.

At this time we can only report that there is one person injured and the shooter is in custody. We are on scene assisting MCSO.

All schools in Marion County have been put on partial lockdown as a precaution. Parents of students at Forest High School can pick up their children at First Baptist Church of Ocala, 2801 SE Maricamp Road.


Tomorrow we will be participating in the student led civic demonstration. This voluntary event will take place during CAT period with an announcement releasing students that wish to participate. Any student not wanting to participate will remain in their CAT period class.😺🇺🇸


According to Marion County Sheriff Billy Woods, the school resource officer heard a loud sound and rushed to the scene and found the victim. The deputy then engaged the shooter, who did not resist arrest, and took him into custody.

Today's shooting is on the same day as the 19th anniversary of the deaths of 13 people at Columbine High School in Colorado. It also comes just two months after the massacre at Marjory Stoneman Douglas High School in Parkland.