A leading NOAA meteorologist died in the rough Atlantic surf, and Floridians should take note

Photo of William Lapenta via NOAA/Twitter
A prominent National Weather Service forecasting official drowned at a beach after warnings were issued by the NWS about dangerous riptide conditions.

NOAA meteorologist William Lapenta, 58, died at a beach in Duck, North Carolina, on Monday. He was spotted by an off-duty ocean rescue supervisor, according to an article posted by the Weather Channel. Lapenta is from Nyack, New York, and, according to AccuWeather, he was on a family vacation at the time.


I am deeply saddened to learn about the loss of my friend and colleague, Bill Lapenta. Bill was a brilliant scientist and mentor to many. He will be missed by all of us in the @NWS and @NOAA. pic.twitter.com/0rE0cvpgdg

The Weather Channel also stated that NWS had issued warnings of "rip currents and high surf" for beaches along the coast of the Carolinas at the time. The warnings were a result of Hurricane Lorenzo, which is currently active in the Atlantic Ocean.

Lapenta was the Director of the National Weather Service's National Centers for Environmental Prediction. In July, he was named the Acting Director of NOAA’s Office of Weather and Air Quality, according to a report by that office.

NOAA posted memorial information on their website Friday, saying, "in memory of Bill’s outstanding contributions to the atmospheric sciences and his passion for supporting the next generation of leaders in the field, the American Meteorological Society (AMS) has established a fund in his name." The post links to a donation site for the new fund.

A report on the National Weather Service website shows that there have been 42 rip current fatalities in the United States this year, 15 of which happened in Florida. They set up a rip current safety page on their website to share more about rip currents. An NWS map shows where Florida's surf fatalities have occurred. 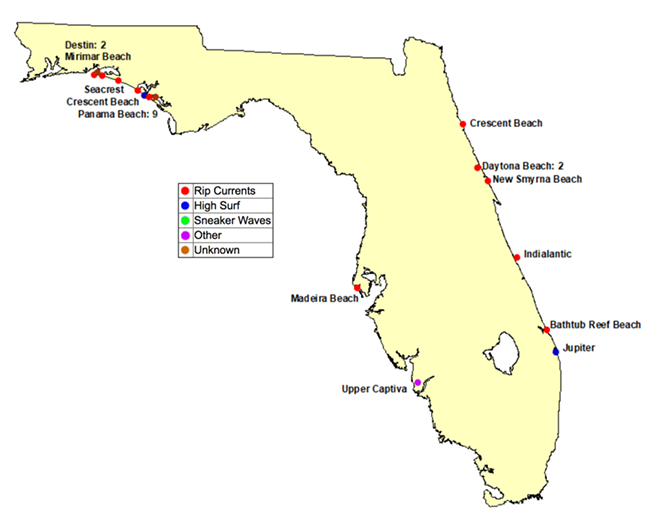 Lapenta,native of Nyack,NY lived in N. Virginia with wife, Cathy,who is also a meteorologist,according to his weather service biography.He oversaw the USA government’s prediction centers,tracked hurricane has died in rough seas on North Carolina’s Outer Banks.
Society of Jesus=79 pic.twitter.com/9KI1QTZhxq

Lapenta, who graduated with his Ph.D. from Penn State University, was also remembered online by his alma mater on Friday. His death is a reminder that rip currents, while often predictable by weather professionals, are still insidiously deadly for swimmers.


@psumeteo is extremely saddened by the loss of alumnus Bill Lapenta ('90 PhD). Our thoughts and hearts are with his family, friends and fellow colleagues. pic.twitter.com/ZmxnrbpECK