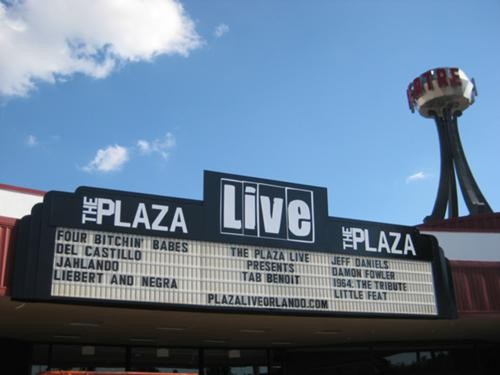 In what Orlando Philharmonic Orchestra executive director David Schillhammer called a "harmonious marriage" this morning over a plastic table, it's now an actual real thing that the Phil has a new headquarters in the slightly worn live music venue (and former movie theater) The Plaza Live on Bumby Avenue. The Phil acquired the building yesterday for $3.4 million, though it was recently appraised at $4.2 million, so, bargain! Also, said Schillhammer, the building has "good bones" and Orlando has gotten into the habit of demolishing everything that provides some sort of character to our city in favor of, cough, Giant Venues. In fairness, Schillhammer made it clear that he will continue to perform in the Bob Carr Performing Arts Centre until it's demolished, and expects that the Phil will also be utilizing the Dr. Phillips Center for the Performing Arts whenever Phase Two gets around to having enough money to be built.

Still, it's a shrewd move for one of the region's most successful arts organizations (OK, THE most successful – $3.6 million operating budget, $4 million endowment). Schillhammer insists that stasis isn't going to help anyone survive in a fluctuating economy and industry, and sees the relocation of the Phil's administrative and rehearsal spaces – previously at Orlando Shakes – as a kind of diversification that is sure to produce increased revenues. As reported earlier, the Phil is working hand in hand with the current Plaza staff on maintaining its pop/rock/jazz programming in the larger theater. Phase one renovations – ostensibly already funded by $1.7 million that the Phil's board has drummed up from within – will likely leave the concert theater open, while focusing on admin space in former Russian Ballet storefront adjacent, and on the smaller theater which will be perfected as a rehearsal space.

The Phil is already working with architects and acoustic consultants on hammering out the scale of work, and has been consulting with a development consultant to expand donations and its endowment. Some of the expected improvements include: a flattening of the floor in the acoustic space (also the removal of the makeshift stage); seating improvements; bathroom upgrades; acoustic reinforcement walls to isolate sound between the two theaters; buildout in the back for load-in; green room; dressing room space; and some general shining-up while maintaining the Art Deco flavor of the space. The Phil's lease runs out with Orlando Shakes next year in September, so there's some breathing room for bidding processes and such. For now, Schillhammer seems elated to have found a new home, and some new energy.

"Stagnation is not an option," he says.