A Florida woman jumped into a pond and rescued her dog from a 7.5 foot gator Photo via 10News
Lori Beiswenger, a 52-year-old Inverness, Florida, resident and fearless defender of dogs, was gardening at her home on July 11, when a 7.5 ft gator started pulling her terrier mix, Hope, into a nearby pond.

"I hear the most God awful, piercing scream that I have ever heard in my life," she said to WFTS. "I was screaming her name, 'Hope, no!' Then, I started screaming, 'Somebody help."

Since no one was around to help, Beiswenger pulled a Happy Gilmore and went after the gator herself. "I jumped in, grabbed the [gator's] tail and pulled him back and he started thrashing and rolling her [Hope] some more," she said to WFTS.

Beiswenger tugged on the gator's tail two more times, and stopped when the 7.5 carnivore turned it's attention to her. While her dog was still being yanked around, Jodie Daniels, a golfer at a nearby course, heard the screams and ran over to help.

According to 10News, Daniels waded into the water and tried to retrieve the dog with a golf club but it wasn't long enough. When he eventually attempted to free the dog with a shovel, the gator let go and the dog ran onto the shore, bloodied but not defeated.

Daniels claims he then smacked the gator on the head with the shovel and it swam off.

The dog went through a three hour surgery and is expected to recover. However, the gator was trapped and killed by a private company the following day. It's meat was sold to a nearby restaurant. "He's now gator bites," said Beiswenger. 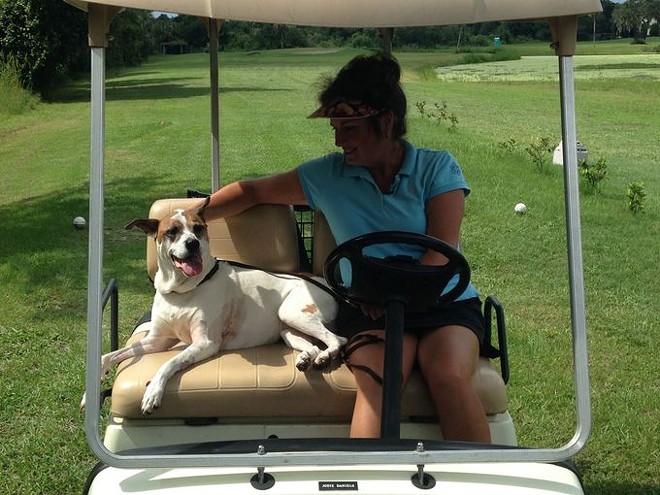 Photo via News10
You can view a full gallery of the whole ordeal over at 10News.