A first-person account of the Inauguration Day protest and Women's March in Washington, D.C.

Time has slowed down for this inexorable event; Trump, his stiff comb-over windmilling in the breeze, his hand on a Bible, swearing, for what that's worth, to uphold the constitution of the United States. I want time to stretch infinitely between now and then, before America commits to a future that feels like the past.

While the Trump family attends a service at St. John's Episcopal Church, two Bikers for Trump, retired firefighters dressed identically down to their ball caps, shades, gray moustaches, middle-aged girth and black leather jackets, ride the DC Metro. A woman wearing a Nasty Woman T-shirt gets on at a stop. The bikers politely make room for her. She smiles and says, "Thank you."

But outside Union Station on Massachusetts Avenue, the protest is gearing up. People mill about bearing posters and banners: "This Is Very Bad," "Resist the Fascist Tide," "Keep Your Tiny Hands to Yourself," etc. There is pageantry as well. A woman in black stands on a median wearing a sign that reads, "Mourning in America." There is a Trump Darth Vader, breakdancing, and a man with a Putin head dangling a tiny dancing Trump puppet. There's even, for some inexplicable reason, two llamas. Posters on lampposts advertise: "#Disrupt J20." 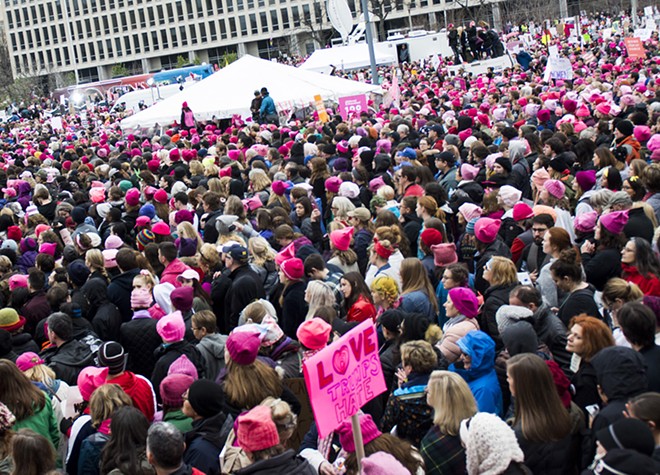 Down Delaware Ave. toward the Capitol, the D.C. police, the Secret Service and the National Guard are out in full force. Vendors sell Trump T-shirts, buttons and souvenirs. The lowly press who lack blue tickets are searched and herded to a gated enclosure, near the Frances Perkins Building. It is sparsely populated and looks like a cage. The Capitol, the spectators and the inauguration are miles away. It is barely possible to hear what they are saying. Someone calls for a moment of silence. There is singing. The invocation. Finally, Trump's inaugural address. His voice floats out into the streets: "This moment is your moment: It belongs to you. It belongs to everyone gathered here today and everyone watching all across America. This is your day. This is your celebration. And this, the United States of America, is your country." Back out in the street, his voice mingles with the cries of protesters.

Down the block from Ford's Theatre, there is chanting. Hundreds of people are in the street, arms locked, blocking access to the inauguration. They turn away people in red "Make America Great Again" hats. They chant, "How do you like this wall?" and "Go another way." One of them breaks off long enough to scream, "Fascist bigots. We're taking a stand."

Suddenly the protesters rush into the street, expand, take over, disrupt traffic. Some wear masks or cover their faces with bandanas, some beat on drums, chanting, "Ain't no power like the power of people." At some point they merge with protesters of the Dakota Access Pipeline. The "Festival of Resistance" breaks up around McPherson Square with speeches and music.

On the way back, there is smoke in the street. It is not a burning Trump effigy. Someone set fire to a newspaper vending machine. Protesters mill about uneasily. "This is stupid," someone says.

Most of the streets are blocked off by black-clad police in riot gear. They stand, impassive, as some protesters taunt them or get too close. "Back off," one says, brandishing what looks like a tear gas canister.

Later, someone throws a rock at a Starbucks, breaking the plate glass. Protesters are arrested. A limousine burns. An army truck blocks the road to the Capitol, which looms in the distance.

Donald Trump is president of the United States of America.

This is the day of the Woman's March, and it is off to a bad start if you actually want to go. In Baltimore, at 7:30 a.m., the line of people runs around Penn Station and down the block. Everyone grabs cabs or Ubers, and the hell with the $100 fare. Coming from every direction toward the Capitol, people text and tweet: "We are 13 miles out and exits are blocked off." "We are trying to get as close as we can and walk." The roads to the Capitol are filled with chartered buses; Florida alone sends 200 bus riders.

The police planned for 200,000. Half a million people showed up. According to Florida organizer Emma Collum, 27,000 were from Florida.

Being in a crowd that big in the National Mall is a unique experience. I thought my presence in the march would be counted as a face in the body of a movement. Instead, smashed into a space near the Air and Space Museum, feeling the pressure and the weight of bodies front, back and center, I felt more like a molecule in a cell. I learned the many pungent varieties of body odor. There was a Jumbotron in the distance, but in spite of the crowd's chants of "We can't hear," the speakers were visible, but inaudible. People stood on ledges and climbed trees. We chanted, "Thank you, Obama." When familiar faces appeared on the screen, we chanted their names. I heard later that Gloria Steinem said that we "looked like an ocean." People held up banners: "Girls just wanna have fundamental rights," "Physicians support healthcare for all," "Resist intolerance," "I'm not giving up and neither should you." A giant cutout of Hillary Clinton bobbed above a sea of pink-hatted heads.

To pass the time, we talked among ourselves. I was surrounded by women from Iowa, Canada and New Orleans. Gillian Wells from California said, "I just didn't know what to say to my son the morning after the election." Someone else said, "I thought Bush W. was bad. That was nothing compared to this."

It took an hour to get out. You could go an inch, wait for another small opening, then go another inch. People with small children and people in wheelchairs were part of this huge, compressed crowd. There would have been a real danger of being trampled except that everyone, without fail, was polite and good-natured. Sarah Clark Hendess, the Orlando organizer, said afterward, "One of the best parts of the event for me was how friendly the crowd was. All 500,000 of us truly stood together in solidarity."

The actual march could have been a logistical nightmare because of the gargantuan multitude. But by mid-afternoon, the crowd did march toward the White House. Many continued marching the streets of D.C. until well after dark.

No one was arrested.