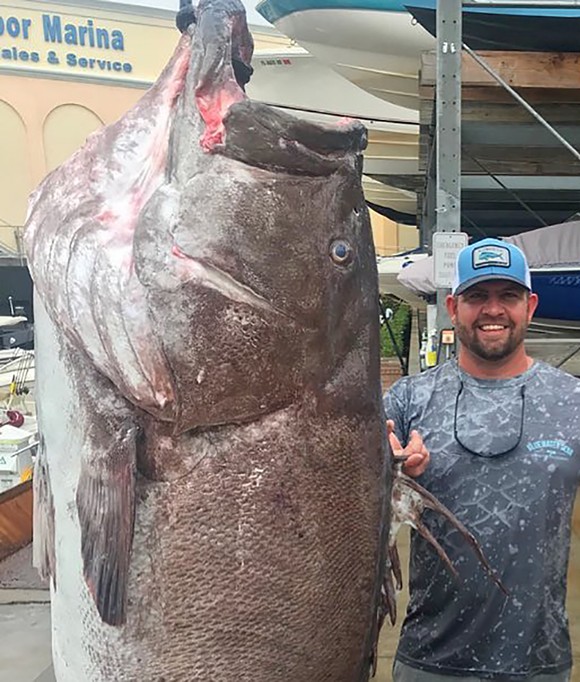 Photo via Florida Fish and Wildlife Conservation Commission/Instagram
Last month, a giant 350-pound Warsaw grouper was nabbed off the coast of Southwest Florida.

According to the Florida Fish and Wildlife Conservation Commission, the massive chonk was reeled in by Jason Boyll on Dec. 29, 2019, in about 600 feet of water with a hook and line.

“Acquiring the otolith from this fish was extremely valuable as samples from larger and older fish are rare,” wildlife officials said in a Facebook post.

The FWC says the fish is believed to be 50-years-old, which means it’s the oldest sample collected for the agency’s Age & Growth Lab.

A big old fish! This 350-lb Warsaw grouper was caught by hook-and-line on December 29th 2019, off Southwest Florida in ~600 ft of water. Biologists from FWRI’s Age & Growth Lab estimated the age of this fish at 50 years old, making this the oldest sample collected for our ageing program. Acquiring the otolith from this fish was extremely valuable as samples from larger and older fish are rare. Warsaw are characterized by an elongated second dorsal spine. They’re the only grouper with 10 dorsal spines; all others have 11. Although adults usually occur in depths of 180-1700 ft, juveniles are occasionally seen around jetties and shallow-water reefs in the northern Gulf. FWC does not encourage the targeting of Warsaw grouper since the status of the population in the Gulf is unknown. #fwcresearch #warsawgrouper #otoliths #ageandgrowth #50yearsold #grouper #fwc

Warsaw groupers are the only grouper with 10 dorsal spines, according to the FWC, and can grow up to 90 inches long and 580 pounds. The largest ever caught in Florida was 436 pounds near Destin.

The FWC also urged the public in their social post to not target Warsaw grouper, since their population in the Gulf is not known.