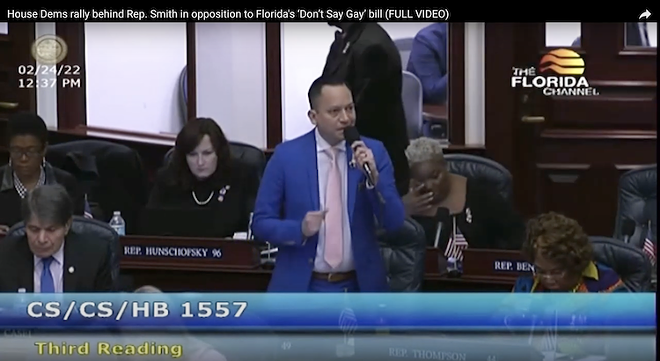 With the end of the annual 60-day legislative session around the corner, tensions ran high again this week during lengthy floor debates as the House considered two of this year’s most controversial education measures.

Last Thursday, the House passed a bill (HB 1557) that would prohibit instruction about sexual orientation and gender identity in early grades, with Republicans disputing a "Don't Say Gay" moniker critics gave the proposal.

The bill would mandate that instruction about sexual orientation and gender identity “may not occur” in kindergarten through third grade.

“It sends a terrible message to our youth that there is something so wrong, so inappropriate, so dangerous about this topic that we have to censor it from classroom instruction,” Rep. Carlos Guillermo Smith, an Orlando Democrat who is gay, told House members.

But several Republicans argued that opponents have mischaracterized the measure.

“The bill, plain as day, states that we cannot have instruction … meaning curriculum led by teachers, teaching children ages 5 through 9, about sexual orientation and gender identity. Think about that. Children that are learning how to color inside the lines, that are learning sight words,” Rep. Kaylee Tuck, R-Lake Placid, said.

Six Republicans, however, voted with Democrats against the bill.

Other parts of the measure are geared toward preventing school districts from withholding from parents information related to students’ health.

The House also last Thursday voted along straight party lines to approve a bill (HB 7) that would limit how race-related concepts are taught in schools and in workplace training sessions.

Under the measure, school instruction or workplace training would constitute discrimination if it “compels” people to believe certain concepts.

The measure targets training sessions, for example, that would lead people to believe that they bear “responsibility for” actions committed in the past by other members of the same race or sex. Similarly, the bill would label school instruction discriminatory if it would lead students to “feel guilt, anguish, or other forms of psychological distress” because of actions committed by other people of the same race or sex.

“This bill makes it clear that in Florida, people will be judged as individuals by their words, by their character, and by their actions — not by their race, by their sex or by their national origin,” said bill sponsor Bryan Avila, a Miami Springs Republican.

Debate about the bill, which was given the title “Individual Freedom,” centered in part on whether the measure could have a chilling effect on educators and employers’ ability to discuss real-world issues related to race.

“Anyone can read a history book, learning the facts. But the utility of teachers, professors, presenters, scholars, is to help facilitate the conversation, the analysis, of what we are doing. Silencing people is never right. And what you’re doing with this bill is silencing people’s ability to talk about deep and meaningful issues,” Skidmore said.

A 24-15 party-line vote displayed the fissure between the parties on DeSantis’ handling of the coronavirus pandemic, a stance which Ladapo has often echoed since the September appointment.

Senate Health & Human Services Appropriations Chairman Aaron Bean, R-Fernandina Beach, said Ladapo has gone against the COVID-19 “narrative,” which might scare people, but he “follows the science and questions it.”

But Democrats argued that Ladapo doesn’t act in the best interests of all Floridians, and instead serves to carry out orders that come from the governor’s office.

Sen. Tina Polsky, D-Boca Raton, called Ladapo, who doubles as secretary of the Florida Department of Health, a “mouthpiece for skepticism.”

“There is a place in science for those who like to go against the grain, like the radical America's Frontline Doctors with which he is associated, and that place is research or academia, which is his specialty,” Polsky said. “He can publish all the editorials he wants to decry accepted science. But what he cannot and should not do is lead the Florida Department of Health.”


IMMIGRANT KIDS GO HOME
Faith-based and immigrant-advocacy groups are urging the DeSantis administration to scrap a proposed rule that would strip licenses of providers who offer shelter and other services to unaccompanied immigrant children.

The proposal would do away with state licenses for organizations that house unaccompanied minors for the federal government while the children’s refugee and immigration status is being processed, unless the DeSantis and Biden administrations reach an agreement.

The rule also would set up a process for providers to conduct welfare checks on children who have been released from shelters and reunified with family members or sponsors.

DeSantis has repeatedly criticized the Biden administration on immigration issues during the past year and has taken steps such as sending Florida law-enforcement officers to Texas to aid with border issues. The Florida Department of Children and Families held an online hearing last week about the proposed rule, taking questions from providers and advocates.

But critics of the proposed rule argued, in part, that the state failed to demonstrate that unaccompanied immigrant children should be treated differently than other dependent children.

The rule is “arbitrary” and “impermissibly vague,” Jennifer Coberly, senior litigation attorney with the group Americans for Immigrant Justice, said.

“The statute as it exists does not allow for groups of children to be singled out without any kind of qualitative analysis that distinguishes them,” she said. “This would appear to be a case of disparate treatment and a lack of equal protection.”

DeSantis in January told the Biden administration that Florida “no longer wishes to be involved in the federal government’s UAC (unaccompanied alien children) resettlement program.”

The governor, widely viewed as a top Republican contender for president in 2024, directed the Department of Children and Families to stop issuing or renewing licenses to providers that shelter the children.

MAP QUEST
DeSantis’ winning week continued with the Legislature signaling he could get his wish to revamp a North Florida district held by a Black Democrat.

A state House panel moved forward last Friday with a plan that could increase Republican seats in Congress.

The House Redistricting Committee voted 15-9 to advance to the full House a pair of revised congressional maps that Democrats and other critics said fall short of requirements under a 2010 “Fair Districts” constitutional amendment. With two weeks left in the 60-day legislative session, lawmakers are trying to finalize a congressional map as part of the once-a-decade redistricting process.

“We are faced with a unique situation,” acknowledged committee Chairman Rep. Tom Leek, R-Ormond Beach. “This is the House’s attempt at continuing to protect the minority groups’ ability to elect a candidate of their choice, addressing (district) compactness concerns, and working to make sure we bring this process in for landing during the regular session.”

DeSantis threatened to veto a congressional map that would maintain Democratic Congressman Al Lawson’s district, which is designed to help elect a Black candidate and stretches more than 200 miles from Jacksonville to west of Tallahassee.

A map needs to be in place before candidate qualifying begins in mid-June. One of the House proposals Friday was considered a “primary” map, with the other a backup.

The primary map (H 8017), introduced late Thursday, would eliminate the sprawling shape of Lawson’s Congressional District 5 and make it compact within Duval County.

DeSantis has pushed for a similar compact design of the district, calling the existing configuration unconstitutional. But the state Senate’s proposed congressional map, which was approved last month, would keep the sprawling design of District 5, which was approved by the state Supreme Court in 2015. Lawmakers also have said keeping the design would avoid diminishing the ability of minorities to elect a representative of their choice.

Under the House proposal, 35 percent of the voting-age population in the revamped district would be Black, which could grow to more than 60 percent in a Democratic primary.

The map would face court tests if it is ultimately approved by the full House and survives negotiations with the Senate and DeSantis’ veto pen. If the map is found unconstitutional, the House plan includes a backup map (H 8015), which has lines for Lawson’s district that are similar to the current configuration — Jacksonville to the Jackson County line.

Democrats called the two-map proposal “novel,” with Rep. Joe Geller, R-Aventura, saying the need for a backup plan demonstrates House leaders aren’t confident in the constitutionality of the primary map. Rep. Kelly Skidmore, D-Boca Raton, said she was disappointed the House has “acquiesced” to the governor.

Even before the emergence of the new plan, Democrats and other supporters of the Fair Districts amendment had raised concerns about a House proposal that was backed by the Congressional Redistricting Subcommittee. They said that proposal did not fully reflect the growth of Hispanic and Black populations in Central Florida and South Florida.

Leek opened last Friday’s meeting by acknowledging a risk of legal challenge “is real,” while dismissing a request by Geller for a “functional analysis” of all districts, rather than just minority-access districts. “The partisan analysis of these maps that are not protected districts will lead us down the road to disaster,” Leek said. “Stop injecting the partisan nature into this process. Let us do our work.”

Florida is picking up an additional congressional seat this year because of its population increase over the past decade. The primary map approved Friday could result in the number of GOP-held seats increasing from 16 to 18, based on 2020 voting patterns.

The Senate’s proposal could lead to 17 Republican seats.

DeSantis proposed a map that would drop the number of districts that historically have elected Black candidates from four to two, with both of the remaining districts in South Florida. It also would bump up the potential number of Republican districts from 16 to 20.