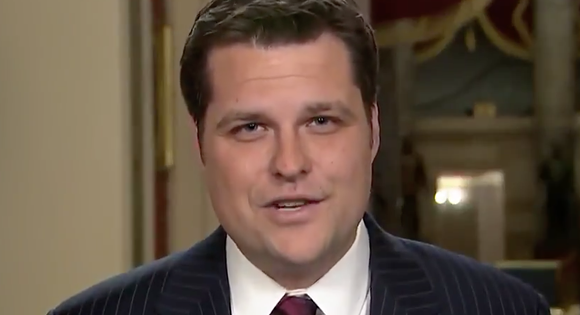 Screengrab via MSNBC
Florida junior Republican congressman Matt Gaetz has had one hell of a year. Without a doubt, 2018 was a new low for Gaetz, which is saying a lot considering that in 2017 he tried to file a bill based on a conspiracy theory he saw on Reddit.

Let's run through a few of the more memorable moments from 2018:

1. Tried to argue that he didn't know his guest to the State of the Union was a white nationalist and holocaust denier
In February, Gaetz's special guest for President Trump's State of the Union address was Chuck Johnson, a banned Twitter troll, accused Holocaust denier and vocal affiliate of the "alt-right" white nationalist movement. After photos emerged of him at the event with Johnson, Gaetz tried to argue he had no idea who he was. Sure.

2. Argued that Haiti should be considered a "shithole" country, because it's full of "sheet metal and garbage"
Gaetz defended President Donald Trump's disgusting "shithole countries" remark by going on television and saying something equally horrid. "I would not pick those terms, but I would say that the conditions in Haiti are deplorable, they are disgusting. I mean, everywhere you look in Haiti, it’s sheet metal and garbage when I was there."

3. Traveled to Broward County to scream at Gillum supporters and spread conspiracy theories about election fraud
In November, Gaetz was mingling in the crowd outside the Broward County Supervisor of Elections Office when he completely unloaded on a supporter of Democratic gubernatorial candidate Andrew Gillum. The suggestion that the state should follow through with the legally mandated recount rules was just too much for Gaetz, who proceeded to argue that the ballots were somehow being changed, which they weren't.

4. Appeared on MSNBC to defend the concept of arming teachers, and then lied about being shot at
"Have you ever taken live fire, sir?" MSNBC's Joy Reid asked Gaetz, to which the congressman responded, "Sure." "Have you?" Reid continued. "Has anyone ever shot at you?" "No," Gaetz then admitted.

5. Un-ironically said Florida's toxic algae crisis is 'horrifying' after trying to abolish the EPA
Naturally, any person would be horrified by Florida's year of disgusting red tide, but Gaetz's reaction is especially rich considering his well-documented terrible opinions regarding the environment. In February of 2017, Gaetz filed a one-sentence bill to abolish the EPA, stating that "this legislation is necessary because it is the states and local communities that are best positioned to responsibly regulate the environmental assets within their jurisdictions."

7. Tried to discredit Jamal Khashoggi in an attempt to cover for Trump's inaction on Saudi Arabia
In October, Gaetz tried to justify the killing of Jamal Khashoggi by arguing that he isn't really a journalist because seven years ago he tweeted, "Dear USA, Your 9/11 is our 24/7. Sincerely, Palestine," and therefore this statement should be something we consider when we talk about how he was dismembered and put into a suitcase.

8. Pushed an anti-Semitic conspiracy theory about the migrant caravan.
Less than a few hours after his incredibly dumb Khashoggi take, Gaetz then pushed an anti-Semitic conspiracy theory about George Soros funding the migrant caravan, which was later easily debunked. He also never apologized for spreading this false information.

10. Got into an incredibly dumb feud with InfoWars
Back in July, Gaetz appeared on Alex Jones' InfoWars, only to later admit that he wished he had never gone on the conspiracy theory-peddling show, which then caused Jones to say Gaetz looks like "a possum that ate a pile of crap."

11. Got owned by a middle school girl
Gaetz unknowingly posted a picture to his Facebook that showed a student at Shoal River Middle School giving him the one-fingered salute. A true hero.