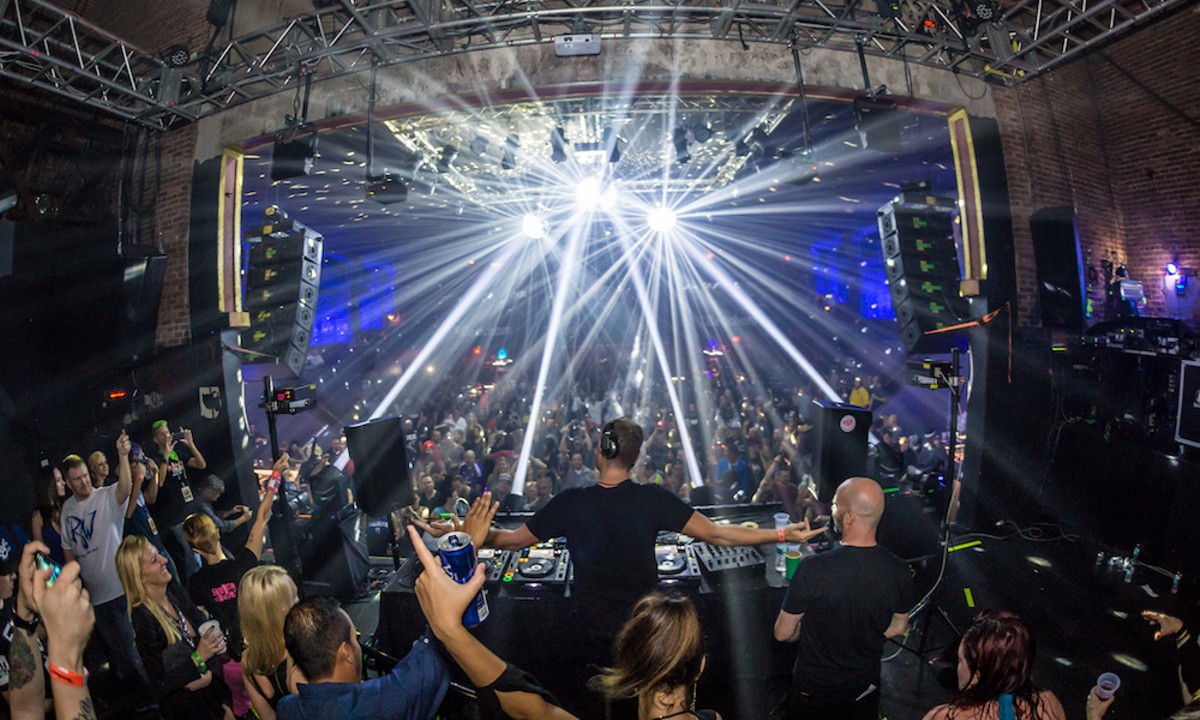 The last thing on DJ and Orlando dance music linchpin Kimball Collins' mind back during the fabled Orlando Summer of Love in the early 1990s was that he would someday be responsible for preserving the legacy of Florida Breaks. Fast-forward to 2017 and he is doing just that, but in the form of gigantic parties.

It's an extremely rare event that can mix a local history lesson with nonstop ecstatic dancing, but AAHZ nights are just that. For "These Are the Breaks 2" tonight, Collins booked performers just like a DJ digs into his record crates, mixing deep cuts with floor-filling anthems.

When asked about putting his set together for tonight, Collins breaks it down thusly, in a way that could also be describing tonight's lineup: "Dave [Cannalte] and I try to create a balance of vibes from the varied genres of music we have played during the original AAHZ era. We stay true to the classics and try not to play the same big anthems at every event, [and] instead try to pull from tracks we didn't play the year before and so on so that our sets don't become stale or predictable."

These Are the Breaks 2 pulls from the many different eras and incarnations of AAHZ (Pure NRG, World War III, Egypt): The lineup includes Dominic B of the U.K.'s break crew Stanton Warriors, the legendary DJ Icey, local favorite Baby Anne coming out of retirement for one night only, and Miami's Scratch-D, along with Collins and his longtime collaborator Cannalte.

Collins explains that this is a party with a purpose, a celebration of an era when Orlando was ground zero for a new type of dance music, and a survey of how that music has changed over the years: "Florida, and Central Florida in particular, gravitated heavily to all types of genres that relied on a type of break-beat from electro, techno, freestyle, Miami bass to straight-up U.K. rave breaks. Those influences went on to develop what would soon become the signature 'Florida break-beat sound.' That explains [Orlando audiences'] love of breaks and why we are happy to do another ... event celebrating this style."

Reflecting back on his early run, Collins says, "In the original early days of AAHZ '89-'93, I knew it was a truly unique and special chemistry that was happening there and then and on a nightly basis. The music, the people and their love of sharing something new and exciting would put an indelible mark on their lives from there onward."

The AAHZ crew has a built-in audience that is both sizable and hardest of the hard-core, as Collins notes: "AAHZ fans are without a doubt some of the most loyal and dedicated supporters of our events; we get a regular amount of those who travel from out of state each year from all over the States and even from around the world." In addition to the diehards, attendees are now treated to the surreal sight of OG attendees bringing their grown children in to experience the night, amongst other new faces eager to hear new old sounds.

AAHZ shows are total immersion experiences, with expansive production and a phalanx of DJs who know their shit, and it's all very much down to the careful curation of Kimball Collins. Of course, he'll be too busy spinning records to acknowledge any of that. Shake it all out on the dancefloor, pre-Thanksgiving. Learn a little something about the electronic music legacy of the City Beautiful, and tomorrow just pretend you're tired from all of that tryptophan.