Welcome back to my column. It's a little different than it's been before, mainly as the result of its source material: All the stuff here is selected and plucked from my blog, edited down and slapped on the page. Like most people, I keep my blog as an online journal, and therefore it documents the many shows I go to around town since, well, that's what I do. Soon, the blog itself will be incorporated into the Orlando Weekly website, but until then, here are some recent bits from it.

There were so many things going on last night (April 14), I had to make a list. Again I'll say it: For those of you who thrive on complaining about how "shitty" and "boring" Orlando is, please actually go out of your house once in a while.

First up was Holidaysburg at Ballard & Corum. B&C is definitely one of the coziest places in town for a show, and for the mellow country-rock of Holidaysburg, it was perfect. The band's singer has a voice that's a little jarring to hear on recordings, but live that full-bodied tone comes through well.

Billy Manes was holding a fund-raiser for his (now-over) mayoral run at The Matador. Oddly enough, the drinks were flowing. Acoustic sets by Joseph Martens, the always intriguing Troubled Children and a very soft-singing fellow going by the name of Ocean Floor made it musically interesting. I had three great conversations and the basic theme of all of them was that the entire subculture of "smart" Orlando people with good taste in music and big, creative ideas about art and culture and community has metastasized to a point where it can no longer be contained in a subculture. Hence, Billy running for mayor, etc. It was very inspiring. Plus, I got to sit in that cool throne.

From there, it was on to Will's Pub to see a slate of local bands I'd never heard of. I'm not even going to mention their names, because they were awful. So I moved on.

I wish I didn't. I always enjoy seeing MeccaNism play, so I was stoked when I got an e-mail from her saying she was playing a Florida Film Festival after-party at Tatàme. Unfortunately, the acoustic set by Mecca and Florizel was almost completely drowned out by the nonstop conversation; nobody was paying attention. (Hell, I thought it was impossible to ignore Mecca.)

Friday (April 15), I went to House of Blues to the Nile/King Diamond show. Unfortunately, I was only able to stay long enough to catch Behemoth, as we were fortunate enough to get a baby sitter and let's just say my beautiful bride wasn't into spending the entire night at a death metal show. Behemoth was silly, by the way, with their cheap face paint and cheaper costumes. I wish I could have stayed to see Nile, because they're anything but silly. 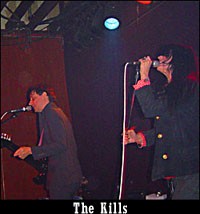 Back downtown, it was a round (or four) of drinks with some friends and a brief, still inexplicable detour into Cairo (I guess that's as close as I was gonna get to Nile, huh?) before heading to The Social to see The Kills. I was totally vibing on Alison Mosshart's cool-kitten energy, but musically, it really didn't hold up. I'm not sure what I expected, as their records are pretty straightforward and the live show was as well. But if they were gonna go so far as to use backing tracks for drums, it would have been nice if they would have beefed up some of the guitar lines too, since it wasn't raw enough to be trashy nor was it solid enough to kick my ass.

Saturday night (April 16) was Green Day at the TD Waterhouse. I took my always-awesome 10-year-old and he dug it. My Chemical Romance was dropping F-bombs like they were going out of style, but I guess when you've only got two decent songs, you've got to do something to get a sold-out crowd motivated. Green Day was phenomenal, though. It was funny to see a Gilman St. band putting an arena crowd through the cliché paces, but the band clearly thrives on the energy and showed a good deal of respect for the people who shelled out $35 for tickets. I mean, there was pyro and lots of it. Rock.

Sunday found me splitting my time between the Black Label Society show at House of Blues and an indie-rock bill at Will's with Biirdie (who were good but, once again, their meticulously arranged organic pop was really not what I was in the mood for) and Inkwell. Inkwell put on a monstrously loud show that was mixed way more nasty (in a good way) than their recent Social show and they sounded incredibly forceful. They were rockin', but nowhere near as rockin' as what happened down at HOB.

I've been to all kinds of rock shows in my life, but the audience at this BLS show was one of the most hard-core bunch of rock & roll motherfuckers I have ever seen in my life. I figured it would be a mix of metalheads, degenerate Ozzy fans and guitar-store guys. No, it was like fucking Bike Week in there and it was a blast. Zakk Wylde is by far one of the best rock guitarists around these days, and everyone pretty much knows that. But he's also simply a monster performer, with a dominating stage presence and a band that's unstoppable. Unafraid to whip out solo after solo (hell, he started the show with a solo), he's equally willing to share the spotlight with his band while dishing out rhinoceros-killing riffage. If there's anyone out there who can save rock & roll, it's probably Zakk Wylde.

Zakir Hussain and Shivkumar Sharma tore it up April 20 at the auditorium at Dr. Phillips High School. I kind of blew it with my Selections preview of this show, which made it seem like it was going to be a Zakir Hussain/Shivkumar Sharma double-bill concert, when in fact it was a Sharma performance with Hussain as a tabla accompanist. And though the stately santoor player was certainly in charge of the proceedings – his center-stage demeanor was elegant and stern – Hussain's wide-eyed smile and enthusiastic drumming was as powerful as it was viscerally engaging. The improvisational dynamics between the two were quite impressive and both musicians proved why they have the sterling reputations they do. My seats – and, by the way, they were actual seats in an actual theater, not bleachers in a gym as I feared – were so good I got to see Hussain get all stressed out. During the brief, between-movements sections where the musicians tuned up, the audience acted like it was a full-on intermission, even though Hussain explicitly stated there was no intermission. The crowd, which had been quite chatty pre-show, continued their conversations during these non-intermissions, and during the second one, Hussain had to shush them so Sharma could actually hear himself tune up. He did this not once, but TWICE. And though the audience should be ashamed that they had to be admonished by a musician for showing such blatant disrespect, the Asian Cultural Association should be proud that, once again, they arranged a great event. Too bad the crowd was so determined to catch up on old times.

Yet another nail has been hammered into the coffin of Orlando's reputation as a middling town for live music. House of Blues Orlando was just ranked by Pollstar as the second in total ticket sales among worldwide club venues for the first quarter of 2005. They sold 58,526 tickets in 13 weeks, a number that doesn't count late shows, Gospel Brunches, local shows … just national touring bands. Do the math and then quit your bitching about how there's never anything cool to do in this town.