VIDEO: Sabals on Off the Avenue

When Sabals performs, they're known to cut the lights and provide their own warm glow, then the bright force of lead singer Beth Bynum's vocals cuts through the darkness like a beam of sunshine through a storm cloud. Sabals formed in April 2014, after core husband-wife duo Beth and guitarist Dan Bynum recruited Beth's Dandelion Communitea coworker Jessica Vacha to play drums. In October of last year, they added bassist Tre Hester (Great Deceivers, solo artist, and occasionally seen performing with the Pauses). They're into Radiohead and David Bazan and spacey, sad songs, and inspired by synths and effects pedals. Despite being so young as a band, they quickly caught the attention of North Avenue Studios' David Plakon and Ian Maikisch, who newly formed their own label, Eye Four Records, and immediately brought on Sabals to record on it. Now, on the brink of the February release of their EP, Premonitions, they're gathering momentum to head out on tour in March. You can catch them first, though, at their EP release show at Will's Pub on Feb. 19. (RSVP!)

Do you have any gear that helps you achieve your sound?
Dan: Beth's acoustic guitar has been with her the better part of her life. It's as much a part of our sound as her voice and songwriting. We use an fx pedal on Beth's vocal mic in some places to add depth and movement to the vocal sound. I've sampled Beth's vocals and loaded them into my sampler so I can play them back like keys and synth. Plus an ever-evolving collection of guitar pedals and synths keep us inspired.

What do you think is important in a live performance?
Beth: Connecting with the audience emotionally and visually. If someone tells me I've "moved" them after the show, I am high for like the next six days.
Dan: I think we try to find ways to immerse the crowd in the performance by being considerate of every bit of light and sound we have control over. Hoping people can then allow themselves to forget where they are for the moment and have a more complete experience of our music. And I've found most of my favorite live shows have this effect on me.

What’s the first album you remember really treasuring?
Beth: Pink Floyd's Dark Side of the Moon.
Dan: I really liked Paul Simon, Talking Heads and early U2 from my parents' records. I think Green Day's Dookie was the first one I bought on my own.

Explain the meaning behind one of your songs.
Beth: "From the Sky" is probably my favorite song we play. It is a really raw and honest story about the death of a best friend who helped me overcome a really messy drug addiction. He and his family were really instrumental in my life when I needed a hand.

What label do you think your music fits best on?
Eye Four Records!

What you’re listening to/loving most in music right now?
Dan: A Lesson Unlearnt by Until the Ribbon Breaks. Hope by Manchester Orchestra. Run the Jewels 2 by Run the Jewels.
Beth: I usually have headphones in 90 percent of the day. Right now I'm absolutely obsessed with the Antlers, the Walkmen, the War on Drugs, and the National. I love a super eclectic range of music, but my favorite is anything spacey and/or sad.
Vacha: I've been loving My Morning Jacket's The Librarian, as well as Dexys Midnight Runners and Brenton Woods.
Hester: Sylvan Esso and Pile. 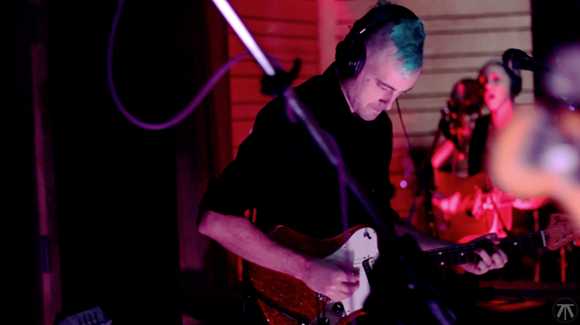 What’s your favorite Orlando venue to perform in?
The Social has great production, but Will's Pub feels like home.

Which band would you most want to tour with, past or present?
Beth: Radiohead! Or the Cranberries. Dolores O'Riordan and I WOULD be best friends.
Vacha: Eric Clapton.
Dan: David Bowie (Ziggy Stardust era) or Rolling Stones.
Hester: The Bee Gees.

Which comes first: the lyrics or the music?
Beth: Oftentimes, the music will be the groundwork for the lyrics, but I have been known to scribble poetry or lyrics whenever I feel inspired, and then piece it together later.

What’s the best story you’ve got about a piece of gear you play with?
Dan: Beth got me an orange sparkle Fender Supersonic guitar for my last birthday. It was a huge surprise and immediately became my favorite.