Send a News Tip
The return of two memorable parties this December offers locals plenty of opportunity to dance the rest of 2014 away. First, the '90s R&B night at Lil Indies, I Don't See Nothin' Wrong, bounces back at 10 p.m. Saturday, Dec. 10, featuring Waldo Faldo spinning '90s hip-hop and major dance hits. (RSVP!) They're charging a cover because it's a benefit show, so they're asking for a suggested donation of $7 to go towards music education for at-risk kids in South Africa.
click to enlarge 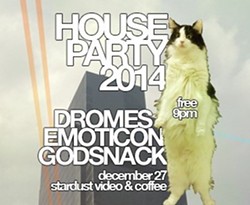 Image via Kelly McGuire
Next, House Party was a favorite way to end the year for many at Stardust Video and Coffee, and now it's revived at 9 p.m. Saturday, Dec. 27, featuring former House Party DJ Emoticon who makes the trip from Toronto to host alongside "your boy" Dromes and St. Pete's Godsnack (Greg Ferris, who performed in Equines, Cats in the Basement). (RSVP!)

Add these to holiday-themed dance nights like A Very Body // Talk Christmas and Talk Yo Shit!: Festivus edition and the end of the year seems bent on destruction, with its lasers pointed at the soles of your dancing shoes.