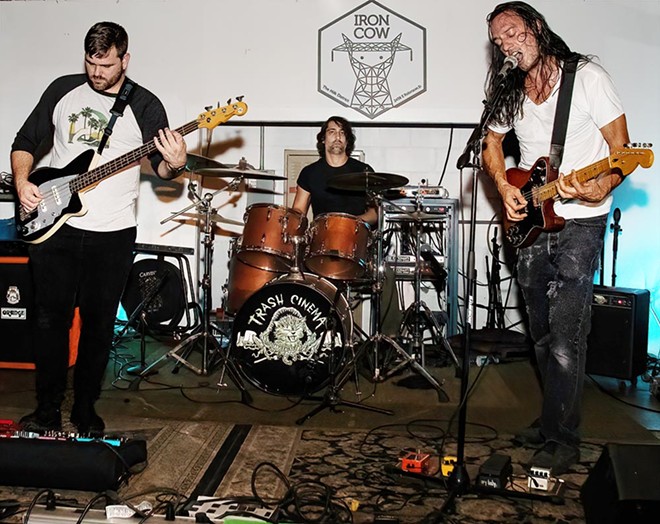 Many in the scene will remember local band Yogurt Smoothness. What they’ve become since, however, has been a considerably more obscure and convoluted path. For years, these hard-charging grunge traditionalists were one of the area’s leading flagbearers of the great two-piece rock band tradition. After a phase of waning activity, they briefly morphed into Death Crusher (or sometimes DTHKRVSHR, just to add another kink to the journey) for a couple of quiet years. Most recently, for the past year, the two original Yogurt Smoothness members have added a permanent bassist to become new band Trash Cinema. Phew, so here we are.

Now, they’ve solidified enough to release a proper debut as Trash Cinema. The three songs of their upcoming self-titled EP signal the clearest break from the strict
grunge template that guitarist-singer Danilo Krkljus and drummer Brian Stabile
have used as their lodestar since the beginning.

The EP releases everywhere Friday (Oct. 14). But, better yet, go experience the full force live at their release show this weekend over in Melbourne (8 p.m., Saturday, Oct. 15, Iron Oak Post, $5) alongside Nilah Lois, Lily of the Valley and notable Orlando noise-rock weirdos Franchise.