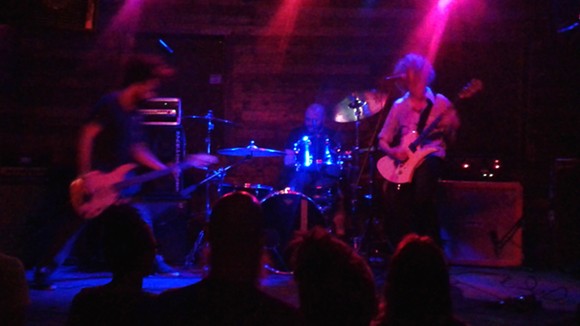 House of Lightning at Backbooth

Headlining a recent heavy bill (June 19, Backbooth) was a pair of Florida bands that blew me down back in March in support of Torche: Stylish but not wanky Winter Haven thrash crew House of Lightning and Miami brute rockers Wrong.

Wrong at Backbooth
Perhaps nobody works that classic Helmet chug better than Wrong right now. Shit, maybe they can come back this fall and show Helmet themselves how to be Helmet again (Sept. 26, The Social). But though the comparisons are inevitable, Wrong is every bit as cocked and forceful as Helmet but a little less uptight. In some books, that could make them superior.


Rounding out the bill was an Atlanta delegation whose star was Rapturous Grief, a marvelously furious duo that comes on like bombs with a dynamic sound that blends hardcore punch with trench-digging metal chops. The unholy racket of metallic hardcore by Waste Layer was extreme but not tight enough to channel their abundant energy, resulting in scattered force.

Waste Layer at Backbooth
A surprise addition to the lineup was new band Strategic War Heads, a group comprised of members of the aforementioned Atlanta bands. Even though the bill already featured five bands, they ripped such a fast and dirty set – lasting somewhere between five and 10 minutes – that they were able to be shoehorned in with barely a dent in the tight production schedule. Warhead is an apt reference because they’re a full-on blast of grind so relentless and dense that I probably won’t be able to make any sense of them until I see them another dozen or so times.