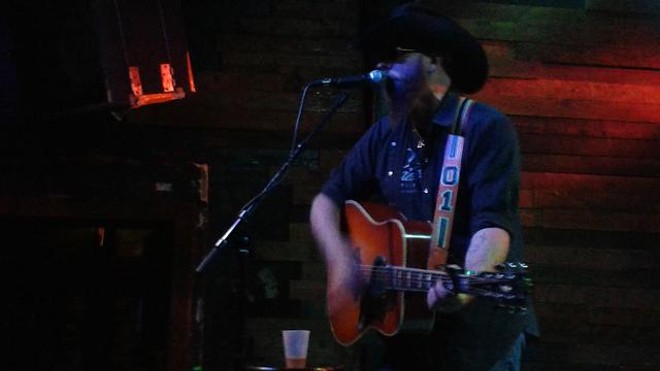 What happened to this city’s love for the Supersuckers? It once existed. I saw it. I was there in 2004 when the good-time country punks rocked a stocked room at the Social and Eddie Spaghetti rolled through two full nonstop sets without even a piss break. Then in 2010, I saw them perform in the cavernous Firestone Live to practically no one. Now, Eddie Spaghetti comes back solo (April 30, Backbooth) and plays to mostly fans of local opener Johnny Knuckles. The fuck?

Eddie Spaghetti at Backbooth
But rather than accept the insult, the man adapts and puts on a great show completely optimized for a small audience. A consummate and savvy showman, he throws the program out the window and goes all request right from the jump. Now that’s total accommodation there. The good news? Despite the lack of numbers, the knowledge of these fans was deep and the stream of shouted requests was enough to propel the night without a pause, even occasionally stumping the artist. The first and only break from that crowd-steered momentum was 40 minutes into the set to preview a song from the new Supersuckers country album that Spaghetti said is currently being recorded in Austin.


I hate to glorify a dismally attended show by a good artist but this one really rewarded the devout. And that’s all due to Eddie Spaghetti’s aplomb and charm as a performer. When you buck the hand you’re dealt and give the true fans that actually showed up what is basically a living room engagement with the benefit of a pro sound system and a full bar, that’s turning lemons into bourbon.