This Little Underground: Of Montreal & Boogarins @ The Social

(Boogarins at the Social / photo by James Dechert)

Boogarins is one of those hot new acts who’ve been trying to catch up with their own momentum ever since they started. The Brazilian kids were signed before they were a full band or even had a name and are now doing their first U.S. shows, this Orlando show (May 8, The Social) supporting Of Montreal. With a nebula of dream-woven melody and fuzz that radiates like a blinding, woozy sun, Boogarins moves their tropical psych-pop heritage into decidedly younger and now territory. And what plays as more pop on record burns with deep rock throb in person, making for an impressive live debut. These boys can kick.

As for Athens headliner Of Montreal, this was the smallest room I’ve seen them play in eons. But luckily, their sense of show and production was fit and alive with theater-like flamboyance in wardrobe and visuals. Their stage aesthetic – arty, elaborate and DIY – has always been a triumph of low-tech/high-concept craft, and it’s still a glorious visual buffet that brings their rabbit-hole freak-pop to Technicolor life. You know those trippy animated music videos on Yo Gabba Gabba that always look like they were made by someone way too “experienced” to be making something for kid consumption? Well, imagine that as a stage show.

Gotta give it to ‘em. Of Montreal has burrowed their way into the pop-culture consciousness deep enough to turn the club into a hot dancing sardine can, all while staying true to their freaky selves all these years. 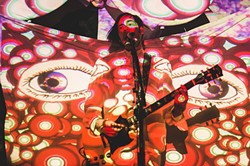 (Of Montreal at the Social / photo by James Dechert)