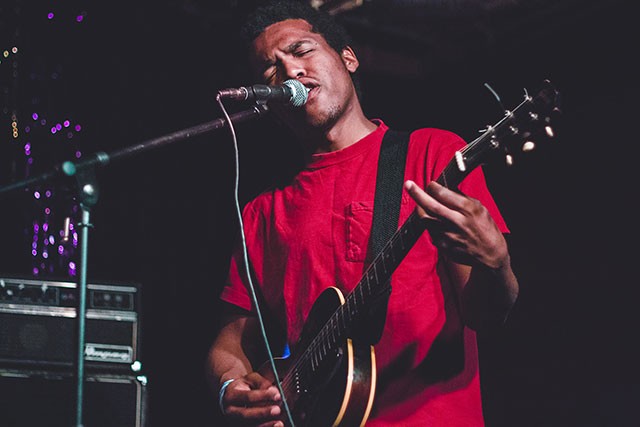 Bright young Orlando symphonic folk band Mojave Wilde is having a secret show for their EP release (March 14). The only reason I’m even bothering to mention it publicly is that it’s not exactly a private show. However, details are strictly word of mouth. I won’t bust the mystique, but keep your ears to the ground and ask around.

I’m not sure what it is about diverse bills that thwart people. I’ve seen some daringly motley lineups meet lukewarm reception despite featuring good marquee talent. It’s a tack I’ve taken almost every time I curate a bill or showcase and I think it’s thrown some people off, like I scrambled their damn brains or something. Perhaps it’s because I’ve done thousands of concerts, but I’d think variety and discovery are what any serious music fan and showgoer would want in a show. But I’ve been wrong about humanity before.

Once in a while, however, that theoretical magic clicks like it did at a recent show at – where else? – Uncle Lou’s (March 4). I’ve no earthly idea how this wildly illogical bill came together, but the only thing I dig more than this clique-defying multeity is that I wasn’t the only one there who did.

I almost don’t want to describe local band Deaf 2 the Industry to you because, on paper, they’re a fusion that’s a near deal-breaker. And that would be prejudicially unfair to them since they’re actually pretty good. But muster the superhuman open-mindedness required to look past the historical horror the term “rap-rock” conjures and you’ll discover a dynamic and vivid live act. To be fair, there’s also some reggae and soul in their mix. And in terms of taste level, the fact that their bassist is literate Orlando hip-hop DJ Cub should reassure. But with megawatts of spirit and an all-out performance style, MC frontman D II is their fire.

In a gear shift as drastic as it gets, the folk-punk freaks of South Florida’s Everymen followed with a rumble of traditional instruments (upright bass, fiddle, mandolin, etc.) and a carnival’s worth of tattoos. Sharing some bloodline from like-minded fellow Lake Worth band Viva le Vox, their rough, barn-torching rave-up plays like Against Me! raised by hillbilly gypsies. Like Deaf 2 the Industry, they’re a total crowd band that’s always gunning to get physical. Hopefully, they’ll be lighting up bigger crowds here soon.

Despite the whiplash divergence in styles, the party lines somehow didn’t matter. I don’t know if it was due to the low-pressure scene or simply the gutsy performances, but it resulted in a much cooler, more open experience for everyone. The vibe was palpable enough, in fact, that Everymen’s singer voiced his appreciation to the contrasting but exceptionally receptive crowd. It was a moment.

The quality continued later up the block with New York’s Iron Chic (Will’s Pub). They’re remarkable because it’s so hard nowadays to be brought to attention by pop punk, whose average has been brought so far down by pap as to become the baby food of punk rock. But Iron Chic stands out and above with their immediate, timeless songs. Edged with ’90s indie-rock character, their melody-punk is powered by big sing-alongs and soaring hearts, as if all it takes to save the day is a good anthem. And amid the packed, shit-losing crowd, my faith in pop punk was reinstated, even if just for a moment.

Right now, Benjamin Booker (March 6, Will’s Pub) has the power of mystery going for him. All that’s really known about the NOLA musician with Florida roots is that he’s already signed to legit label ATO Records, though his debut album won’t come till fall. What little can be found online shows promise. But after peeping him live, goddamn, this kid is the real deal. Arranged like the Black Keys and fuzzed-up like the Dirtbombs, Booker and his drummer tore into a hot grease bucket of hard soul, blues and rock & roll that’s straight outta the garage. He channels the O.G. fire of Chuck Berry and Little Richard with the raw heat of Southern punk. And he’s already got the soul that some of today’s garage kings are only pretending at. Look out.