This Little Underground: Marc With a C, Harsh Radish and Samurai Shotgun at the Grand Collab (Will's Pub)

Send a News Tip
I know there are music seekers out there. Not enough of you, but there are more than I’m seeing – at least that’s what I keep telling myself in order to go on living. For those so inclined, multi-genre showcase series the Grand Collab has become my little, not-so-secret safari spot to sample and discover nascent talent from not just the metro but from around the state.

Emmit Dobbyn
Marc with a C
The latest chapter (June 28, Will's Pub) was bookended by quantities that were already known to me: hip-hop neo-classicist AMiAM and quirk-pop veteran Marc With a C. It’s been probably several years since I’ve seen the latter on stage and it’s nice to see that he’s still plying his dork wit to good effect. With over a dozen years in the game, Marc is a bit of a local cult hero in the nerd scene. But he isn’t that outmoded, old-school wallflower archetype. He is through and through today’s nerd: out, proud and in charge. Though he lyrically engenders all the requisite awkwardness and humanity, he does it with total assurance in his musical and comedic ability, which are by now quite well-honed. 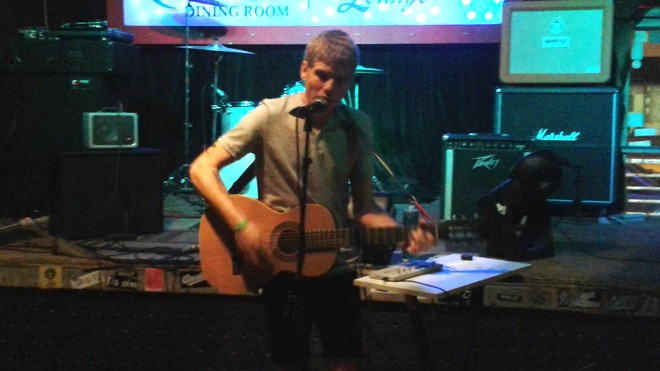 Harsh Radish at the Grand Collab (Will's Pub)
The rest were new finds. The first was Orlando’s Harsh Radish, an interesting one-man act that fuses guitar and synthesizer. Although his indie blend of pop, electronic and acoustic observes little visible boundary in style or medium, it’s all unified by a nervy melodicism.

via Samurai Shotgun's Facebook page
Living dangerously: Samurai Shotgun
The other was Tampa’s Samurai Shotgun, a band with the danglers to venture into the defiled fusion of rap and rock. Many an art crime has been committed by a full rock band with an MC and a DJ, but try and leave that luggage behind when you consider them. Like Orlando’s Deaf 2 the Industry, Samurai Shotgun’s imagining of rap-rock is a million miles away from the bro tools that left their stench on the concept. Perhaps it would make you feel better to know that they’re much more Rage Against the Machine than Linkin Park, or that frontman Mateo Henley recognized my Death From Above shirt even though it had no words on it. Either way, just know that they don’t try and sprinkle in clean singing or any shit like that. It’s an amalgam of rap, punk energy and spacey effects that’s raw and visceral.

Because one of the acts dropped off, the formal part of the showcase ended early. But true to the intimate and cooperative spirit of the Grand Collab, the action moved down to the floor in an impromptu cypher that involved featured rappers AMiAM, host TKO, Mateo Henley and anyone game enough to step up and jump in. It was a moment.