Prior to the prime of locals like Matt Kamm (Telethon, Me Chinese) and Timothy Murray (Moon Jelly, Zenas Fisk, Auto Chlor), the kooks of Happy Valley were the reigning kings of Orlando's freak-rock scene. Although they just played their first local show in a year last night (June 8, Will's Pub), it’s been probably several since I last saw them.

In that time, a roster change has replaced keyboardist Rogier van Etten with Danny Feedback, a storied local artist whose taste for oddity and mischief is as ideal of a match for this band as can be imagined. In this new arrangement, the keytar is replaced by a traditional bass that more than makes up expressive ground through a wild arsenal of pedals. The result is a harder-hitting sound that recalls the punch and crunch of their earlier days, and it's a good return. This is a band whose sonic backbone is wildman (and bear dream) Evan Shafran – a guy who plays his drumsticks backwards like little clubs – so the added rock makes for a more logical, unified and forceful sound.

This performance had none of the sensational DIY props that Happy Valley was doing way before Andy Matchett and the Minks, but it didn’t need any of that. No, just seeing one of the most wildly original bands this city has ever birthed revived and reloaded was as much as anyone could ask for of a show. And as this set reminded even me, Happy Valley could easily step back in the scene and still be among the cream of the weird crop. Now that they’re back practicing on the reg, that may just happen. So stay tuned. 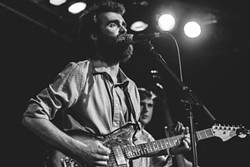