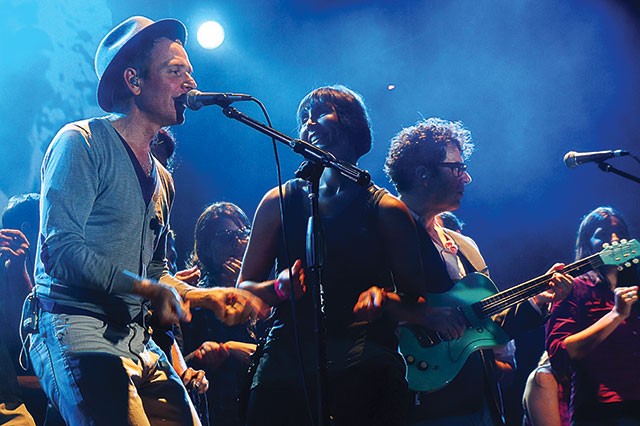 From the Scene Insider Desk: Will’s Pub’s latest coup lands Tierney Tough to upgrade its booking and promotions force. From years of notable street duty fronting the Pauses, playing in Matt Pond’s band and organizing the well-curated Orange You Glad Music Festival, she brings taste, know-how and tons of meaty contacts. It’ll be interesting to see what happens now that Tough’s official home base is one of the city’s premier indie venues.

A little history was made this week. With this Orlando appearance (Sept. 29, House of Blues) and the Miami one the night before, Scottish darlings Belle and Sebastian finally played their first-ever Florida shows. Exciting, right?

I’m a cuckoo: Photos from Belle and Sebastian at House of Blues

Well, it came out during the show from the man himself that frontman Stuart Murdoch is married to someone from the area (Marisa Privitera Murdoch). Instead of namechecking Disney like every goddamn musician seems to think they’re the first to do (especially when playing HOB), this guy drops places like DeLand, DeBary and Volusia County. Apparently, that’s why he had lots of family in attendance. The band even honored a song request (not a B&S song but rather Elvis’ “Love Me Tender”) from his mother-in-law (sup, Gladys!).

At first, it’s a nice local epiphany. But then up creeps the obvious question: Wait, WTF took you so long to play here? Seriously, Stu, you couldn’t have peeled off even a solo show at the Social while here during the holidays or something? But then the realization of the occasion snaps back in, and having twee-pop royalty in town for the first time is a pretty big deal. So let’s get adorable, y’all.

In addition to their (already full) core septet, Belle and Sebastian came packing a five-piece dedicated orchestral section that sometimes stretched to seven. For a pop band especially, this is live ambition of another degree. Unsurprisingly, they sounded pretty beautiful. With all that talent and personnel, their playfully literate music was rendered with real, organic grandeur like a band of jangly, restrained Bacharachs.

But just when they’ve gotten everyone content to enjoy the warm but polite splendor of a show well played, the band shatters the big-venue formality and invites anyone and everyone up on stage to dance to fan fave “The Boy With the Arab Strap.” This, of course, triggers a bit of a stampede, as much of a stampede as pop nerds can muster anyway. It was quite a sight and made a lot of people’s nights, that’s for sure.

Although they’ve proven to be some of modern music’s finest popsmiths, the increasingly unprolific Belle and Sebastian haven’t really flexed their presence in years. But this big performance was a very good beckoning back into the breeze and insouciance of their enchanted realm. Like a conceptual, immaculately styled vignette stretched into not just a long music career but an enduring state of being, they’re the soundtrack to a world that’s a few inches off the ground and just beyond reality. Who wouldn’t be eager to return to a place like that? Fortunately, with a new album (Girls in Peacetime Want to Dance) that’ll finally see U.S. release on Jan. 20 on Matador Records, Belle and Sebastian are back.

It’s nice to see country-rockers Richard Sherfey and All God’s Children play out more these days. After moving to town and getting into the craft beer business at Redlight Redlight, Sherfey sort of put his music career on ice. Now there are some signs of new life, the latest being a recent headlining show (Oct. 1, Will’s Pub). He’s assembled an all-star band locally by cherry-picking top talent from the remnants of the city’s once-defining American trad-rock scene, including members from Mike Dunn and the Kings of New England, Gasoline Heart and Squad Five-O. As for Sherfey himself, the guy’s still got the gospel and fire in his throat. The astonishingly convincing CCR cover they played proved that. The Sherf tells me that the increased gigging has been a result of him and the boys rediscovering the high of live performance and that there are even a couple new songs they may try and record soon. Stay tuned.

The drunken gospel: Photos from Richard Sherfey and All God’s Children at Will’s Pub