The popular music landscape can be a soul-killing place. But here, this was a week boosted by righteous tales of success despite tall odds and acts that serve as proof that there's some justice in this cruel universe.

Because of their lack of pop convenience, Florida's Hundred Waters may be one of the unlikeliest rises in the music world today. I've always believed in them; that's why I wrote a feature story on the band back in 2012. But I don't always believe in the public at large to recognize the good before it, and Hundred Waters is a fearlessly esoteric band whose chief concern is depth, not bang. Their music landing on a Super Bowl ad for Coca-Cola this year is only slightly more statistically probable than the Rosetta comet landing. But that's what makes their victory that much bigger. It's not just the ultimate underdog story, but the triumph of art.

Hundred Waters formed in Gainesville but have enough deep, local ties to make their recent show a homecoming of sorts. As if acknowledging all their recent milestones, they played to a sold-out crowd at the city's poshest venue (March 13, Alexis & Jim Pugh Theater, Dr. Phillips Center for the Performing Arts). Between the blossoming star of frontwoman Nicole Miglis and a dynamically conceptualized show, they put on a serious display of artistry. Most importantly – for them, for Florida, for good music in general – they're already taking primetime shape.

Jersey's Screaming Females are becoming an inspirational tale of DIY success. After 10 years of grind, they returned to town as a headliner (March 12, the Social) on the wings of a momentous album. Although the freshly released Rose Mountain is the first time the resolutely self-sufficient group has ever surrendered production responsibility to an outsider, it was to Matt Bayles, whose work with Mastodon, the Sword, Isis and KEN Mode certifies him as a producer who can seriously honor the guitar. That's an absolute prerequisite for working with frontwoman Marissa Paternoster. The cleaner sound takes a little adjustment, but the result is one concentrated kick.

What hasn't budged an inch, however, is their live attack, which continues to stun. What Screaming Females are doing is angling classic rock virtue through a punk lens. They're taking some great tradition, boiling it back down to its pure truth and keeping it honest and essential. And did I mention that Paternoster is one of the underground's beastliest rockers?

When I first saw – no, experienced – New York's O'Death at the original Will's Pub back in 2006, their gypsy punk revival clutched me by the neck and put me in a spell. They were just emerging then but were already one of the most feral indie folk acts around. They got signed soon after and went on to release on notable indie labels like Ernest Jenning and Kemado.

Since that first splash, however, their punk nerve had gradually, sadly ebbed. But on their latest album – Out of Hands We Go on interesting and upward Brooklyn label Northern Spy Records – some of those wild, virile vines have crept back into the grave to awaken the skeletons. There's not enough of their early bloodthirst, and quite possibly never could be for me, but O'Death has recaptured some of their original ability to cut to the bone. Not all of it has to do with stomping the porch, either. The atmosphere they've been chasing for a long time now is something they're finally beginning to master with incision.

For O'Death's return after many years (March 11, the Social), they proved that, even with more discipline, they can still shake the shack like few can. The cumulative effect was more complete and resonant than that. This was a reclaiming of folk music.

O'Death has nothing to do with the cherubic folk-pop that's hot right now, or even down-home country comfort. Their inspiration is the kind of deep, dark folk that's steeped in dirt and mystery, the kind that rattles with the power of superstition. It's a gnarled sound that's ancient, remote and fringe. And, live, it casts a mighty hex. This crowd was theirs within 10 minutes. Welcome back, O'Death. 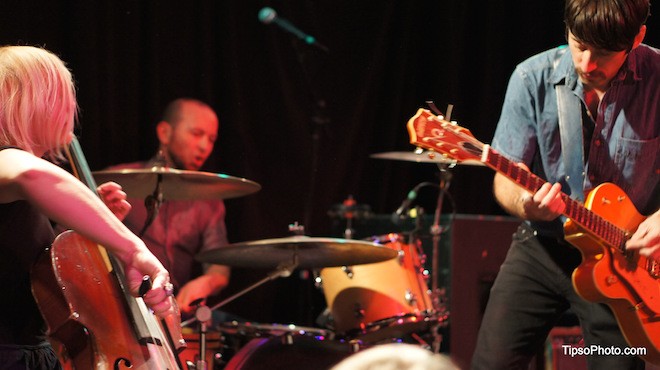 Michael Lothrop
Big dark love: Photos from Murder by Death and O’Death at the Social