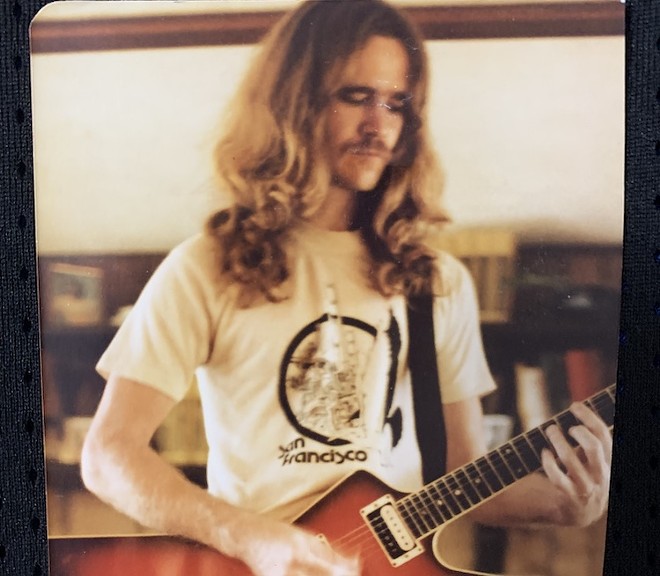 Courtesy Photo
Portrait of the artist as a young man: Ervin Shuemake back in the Ervin Berlin days

“When I moved to Orlando, I was always hoping to find out more about what was going on in the late-1970s, early-’80s Orlando punk scene and hopefully discover some lost gem,” says Rich Evans, the former longtime Orlando resident and current Portland resident behind Total Punk Records.

Indeed, many of us have wondered if there was a ‘Great Lost First Punk Band’ in Orlando, some weird and wonderful record released in a limited pressing sometime between 1975 and 1980, a time when “punk rock” was still more of a pop culture phenomenon than a codified sound.

Recent years have seen so many (re)discoveries of proto-punk groups that had emerged during that nebulous time — first through the Killed by Death and Bloodstains vinyl compilations, then later through reissue labels and YouTube videos.

But what about Orlando? Who could stake a claim to being Orlando’s first punk band? Chicago had Tutu and the Pirates. Cleveland had Electric Eels. Hell, even Fort Myers had Antler Joe and the Accidents!


“The song was about a fellow musician and friend that had a problem with PCP. I pitched the idea to a government agency for a ‘public service announcement.’ I think it was D.A.R.E. Some of the words were just a little too controversial.”

So, yeah … what about Orlando?

Leave it to Evans to unearth and present to the world the group who, arguably (always arguably, because who knows what else is out there from those halcyon days, just hiding in some attic waiting to be found), can stake a claim to being Orlando’s very own first punk band. (And here you thought it was Shyster. Ha!)

The name of the group is Ervin Berlin, a short-lived trio that got together in 1979. They practiced during the off-hours of bass player Tom the Bomb’s dad’s restaurant on the corner of Robinson and Orange Blossom Trail; played a handful of shows and house parties around Orlando, Tampa and Gainesville; and recorded a two-song 7-inch single for a self-released 200-copy run (that Total Punk is reissuing this very week) before parting ways.


Recorded in 1980, “Junior’s Got Brain Damage” b/w “Last Time” is the perfect personification of the Dictators’ Handsome Dick Manitoba’s description of punk and punks from that time as “smart guys who like dumb stuff.” It truly embodies why some of us love this magical epoch in music, when bands like Ervin Berlin lived in that gray area between punk as imagination and punk as sound.

References to totems of ’70s excess like Quaaludes and “angel dust” are almost requirements for punk stompers like these, and “Junior’s Got Brain Damage” manages to cram in references to both.

“The song was about a fellow musician and friend that had a problem with PCP,” recalls Ervin Shuemake, Ervin Berlin’s vocalist and guitarist. “I pitched the idea to a government agency for a ‘public service announcement.’ I think it was D.A.R.E. Some of the words were just a little too controversial.”

At the time of the band’s inception, Shuemake was in his late 20s. He had earlier played on a 1973 album called Translucent World by Florida psych-rockers Terry Brooks & Strange. He also played in various hard rock and prog rock bands in the area before making the acquaintance of a drummer named Jeff, and a bass player who went by “Tom the Bomb,” both younger musicians who were fans of this new(ish) craze known as punk rock.

“[Jeff and Tom the Bomb] attended practice sessions with me and my other bandmates,” says Shuemake, who these days lives in Ocala. “They were fans of [my] band. After catching the New Wave bug, we began practicing together in Jeff’s father’s restaurant. At the time, I was listening to music like the Split Enz and the Clash and other artists that were on the radio. I wrote these two songs and Ervin Berlin was born.”

The two songs strike a nice balance between Shuemake’s musical chops and Jeff and Tom the Bomb’s youthful exuberance. The guitar sound reveals an obvious familiarity with more aggressive psych like Hawkwind, but the no-frills rhythm section ensures that these songs don’t veer off into the proverbial cosmos and remain grounded in the mean(ish) streets of Orlando, as they go — to quote a choice lyric from “Last Time” — “ridin’ that new wave, listen to me play!”

“I had never heard of Ervin Berlin or this single before earlier this year,” says Evans. “A Discogs user named Ilene Dover [talk about cruel parents] reached out to me, and mentioned having a copy of this rare punk single from Orlando for trade. I asked him for more info on it and he sent me a link to a YouTube video. From there the hunt was on. It took me about a month but I tracked Ervin down. We talked on the phone and made arrangements to reissue it.”

“It was an incredible surprise to hear from Rich,” says Shuemake.

Shuemake adds that OG copies of “Junior’s Got Brain Damage” now go for $500 among the grizzled record collector set, so this Total Punk reissue is especially welcome for the workaday music fan unwilling and/or unable to shell out that kind of dough.

Seeing this formerly lost Orlando musical treasure out in the world again puts us in mind of the Mikhail Bulgakov quote, “Manuscripts don’t burn.” As we’ve seen time and time again with the music that went unheard when first released, all (don’t laugh) great works of art, no matter the medium, will, eventually, reach the audience they deserved all along.

Philadelphia's Kaonashi bring their dizzying post-hardcore to Orlando next week