“Doing other things doesn’t make you less true to yourself. So this time, we were trying to mix it up, have more variety.”

If that doesn’t sound like the words of a punk-rock princess choking on her own progress, then you haven’t been paying enough attention to bands trying to justify their inevitably disappointing second album. True to form, those words are in reference to the second album by Be Your Own Pet, attributed to the band’s young, bratty, volatile and explosive singer, Jemina Pearl. Well, Pearl used to be young, bratty, volatile and explosive. She’s now running up on being of legal drinking age, which means that she’s no longer the insouciant high school student who pushed back against a raft of stereotypes by spitting, windmilling and fuck-you-ing her way across stages, propelled by the barely contained garage rock of her equally young and explosive bandmates.

With Get Awkward, the band’s songs are still bracing and efficient – only one clocks in at over three minutes – and Pearl is still an unhinged, full-throttle screamer who’s unashamed to make a shouted “WHOOO!” part of a chorus. But it would be unfair to expect the album to maintain the same invincible immaturity that propelled Be Your Own Pet through their first EPs and 2006 self-titled debut LP. To that end, Steven McDonald (Redd Kross) applies his lifetime of merging smartass attitude, punk-rock roots and pop sensibilities to the production work. (On the album’s weakest track – the midtempo “You’re a Waste” – Pearl’s singing voice bears a striking resemblance to that of McDonald’s wife, Anna Waronker.) The result is an album that moves the band forward incrementally, dialing down their spazziness in proportion to the level that their songwriting chops have improved. Which is to say, not much. The arrangements are still basic and modular, the lyrics are still dumb, the chords are still single-digit and it’s still the drumming that drives the whole thing.

So why does the 2008 model of BYOP feel so different than the 2006 model? Well, there’s the fact that this defiantly carefree band is heading out on a corporate tour with She Wants Revenge. And if that doesn’t leave a weird taste in your mouth, try this out: Less than a month before it was due to be released in the States, Universal Records deemed three of Get Awkward’s songs “too violent.” (Though signed to Thurston Moore’s label, Ecstatic Peace, BYOP’s U.S. releases come through Ecstatic Peace/Universal.) Rather than stand their ground, the band simply removed those three tracks from the album. In an interview with Washington Square News (the newspaper of New York University), Pearl coughed up this response:

“Other than that, Universal has been great. But I guess that’s just what happens when you decide to have something to do with a major label.” 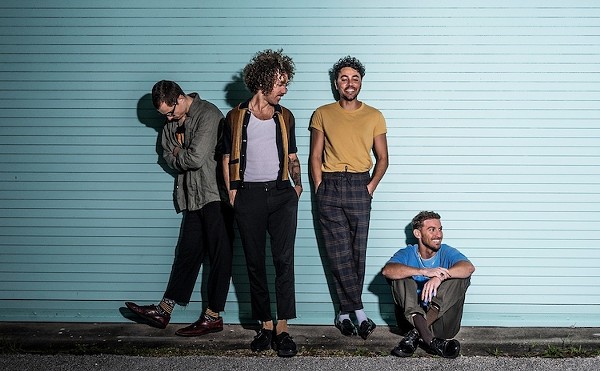