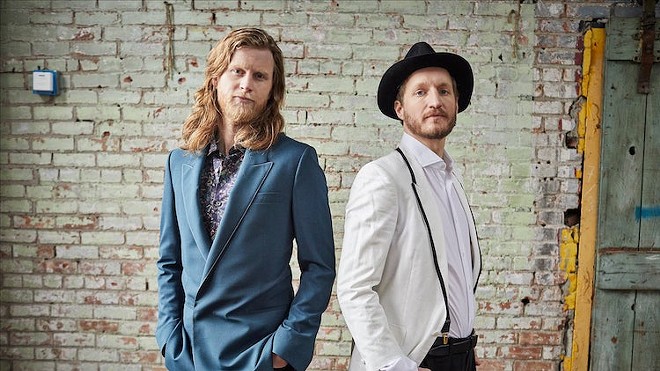 The Lumineers will be at Amway Center on Tuesday, and Orlando Weekly caught up with lead singer and guitarist Wesley Schwartz, who spoke about the band’s new album, Brightside, and the joy of live performance.

Having been forced off the road by the COVID-19 pandemic only five months into the two-year tour supporting their previous album, III, the Lumineers are back in the saddle, and well into their current world tour by the time they come to the City Beautiful.

"We typically pop down into the crowd during our shows, and I remember being warned to stay on stage and not get too close to people,” Schultz says, recalling their 2020 concert in Louisville, Kentucky. "We weren't quite sure how this thing was spreading and how serious it was.”

They used the in-between time to create music — together and independently — and from their pandemic incubation produced BRIGHTSIDE, which has the immediacy and grit you might expect from a live show.

"It’s supposed to feel alive, you know? Not so rehearsed and not so planned. A lot of the takes you're hearing on the album are like first, second and third takes. They're not really like the 20th time we played something. You know, it was very early in the stages of writing the song that it was being recorded. It gives off this feeling that's way more loose and live than previous records,” explains Shultz.

That’s exactly what Schultz wants: “I feel like … at a concert, where you can put down your phone and be there in the moment, and feel things you care about with complete strangers … there's something about it that’s like a transport, you know, it takes you somewhere else.”

That “somewhere else” may as well be a pub in Dublin. No matter the size of the crowd, a Lumineers show feels intimate. Everyone’s singing along, singing their hearts out through smiles and tears. You would think Schultz and bandmate Jeremiah Fraites cut their teeth on old Irish ditties, but no.

"The only history I can point to is when I was real young, I remember having to sing 'Danny Boy' in chorus. … It's like the only thing I know directly about it. And then as I got older, as we went over to Ireland, in these bars they sing these really cool folk songs. Just kind of like, they're awesome.”

Schultz first visited Orlando as a kid, when his family made the 25-hour drive from New Jersey to visit Disney World.

“I was probably seven or eight, and it was in August and, it was very hot. My mind was blown. I didn't care that it was a hundred-plus degrees … I remember jumping in [the pool] at night and thinking it would be refreshing. And it was just, like, as if you were jumping into air; it was the same temperature,” he remembers. “And then … when we started touring, in Florida in general, they were so psyched that we were out there. I guess not everybody makes a stop in Florida. So there's like a lot of like appreciation for people who make the trip and make the effort, unlike, let's say New York City, Nashville, or L.A., where they kind of get everyone rolling through.”

Show The Lumineers some love for coming to Florida once again Tuesday at the Amway Center.