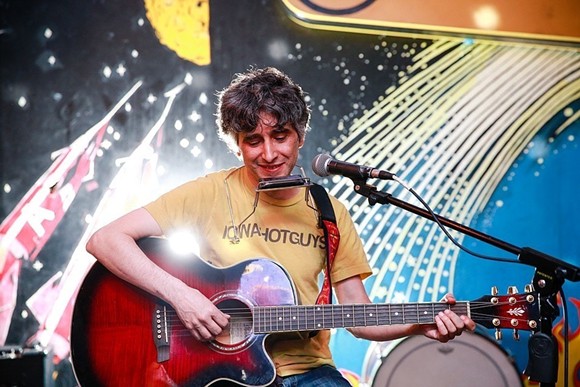 The Dead Milkmen were standard-bearers for what was called “college rock” in the 1980s, tossing out nervy and angular jangle-pop anthems that captured the travails of being young and out of step in the Greed Decade. Singles like “Punk Rock Girl” and “Bitchin’ Camaro” were mixtape essentials, and their iconic cartoon cow adorned the T-shirts of anyone smoking in the parking lot before high school started. When the band fragmented in the mid-’90s, Talcum tried his hand at other groups, like the Low Budgets (also reuniting the Milkmen), but increasingly focused on his solo work.

Jump forward to this year, and we’ll have a chance to reacquaint ourselves with the state of the Talcum 2020. Given the evidence of his recent split cassette with Gravey Train, there’s compelling listening to be found. Talcum’s voice is still as gorgeously awkward and anguished; the playing is rootsier, but without being all flannelriffic. Talcum’s on tour with outlier hip-hop hand Coolzey, and wondrously weird local project Future Bartenderz is in the mix, so it should be a good night.