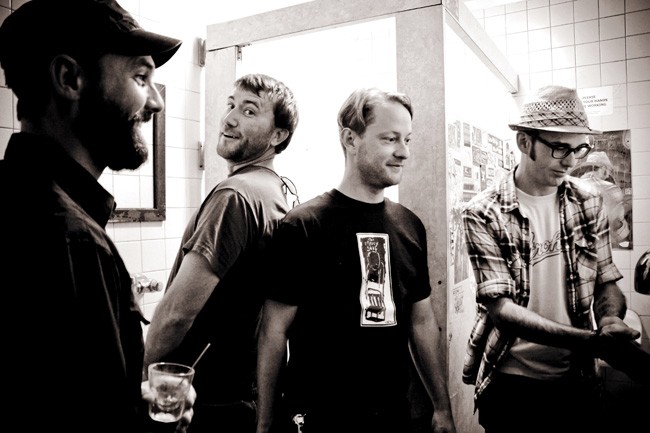 In their quiet, head-down kind of way, this Bradenton, Fla., Americana band has been doggedly pursuing the dream for a handful of years, and they’ve accomplished more than their sporadic Orlando appearances might suggest. Besides a robust list of home-area accolades, their music has been featured on NPR, PBS’ Roadtrip Nation and a national Chevy TV spot. Their last album (Postcards from the Friendly City) even climbed to No. 56 on CMJ’s Radio 200 chart.

Although Have Gun Will Travel’s sound has traveled many of folk music’s tributaries over the years, the one quality that’s remained steadfast is their studious, elegant take on American twang. And this third album – now available on colored vinyl (white and blue) – may be their most centered, even and seasoned collection yet.

Rendering country, folk and rock with a bright and concise pop sensibility, the seasons of Mergers & Acquisitions show echoes of the Avett Brothers, Dylan and straightforward alt-country. Its selections range from folk ruminations to interstate blazers (“To the Victor Go the Spoils,” “Song of Seven Sisters”) to cowboy prairie lullabies (“By the Flicker of the Flame”). But what showcases Have Gun Will Travel’s melodic acuity best is when they strike the mid-paced, reflective gallop that’s in choice songs like the high-lonesome “Dream No More,” the heart-stroking ease of “Time Machine” and the driving introspection of “Freightliner.” When they hit that spot, it’s all gentility and soul. Other standouts include the sweet country curls of “Katharine, Don’t Fall Off the Wagon” and the last-call sway of “Streets of New England,” a song at home in the pub or the saloon.

Mergers & Acquisitions is a confident furtherance of Have Gun Will Travel’s well-crafted sound. Between bands like them and Will Quinlan & the Diviners, we may have to finally admit that the Americana that trickles from the Tampa Bay area is probably the Sunshine State’s smoothest brand of whiskey.