The best concerts coming to Orlando this fall

From underground to superstar to legendary, the shows you won’t want to miss

Photo by Jen Cray The Kills

As the summer theoretically draws to a close and autumn approaches – if we actually had seasons, of course – the concert season heats up as musicians of the underground, superstar and throwback varieties hit the road in a mad rush to beat winter. (Or to spend winter in our sunny climes.) It makes for about three packed months of live music of all stripes. There’s something for everyone on this list – the truly adventurous should treat it like a scorecard and try to catch ’em all!

The only Florida show for these reunited British shoegaze-noisemongers is shaping up to be mind-blowing and eardrum-rupturing in equal measures. The band promises to run through epochal and much-loved albums Raise (1991) and Mezcal Head (1993) from start to finish. Prepare for bliss through punishment.

One of the all-time greats in hip-hop, New York MC Nas has been honing his craft relentlessly since the early '90s, hitting an early peak with 1994's instant classic Illmatic. However, Nas' rhymes were built to last, as he followed up that album with seven other platinum releases. Still relevant decades later – soundtracking The Get Down and collaborating with Lin-Manuel Miranda – Nastradamus hits town with cutting-edge MCs Wale and Nick Grant. 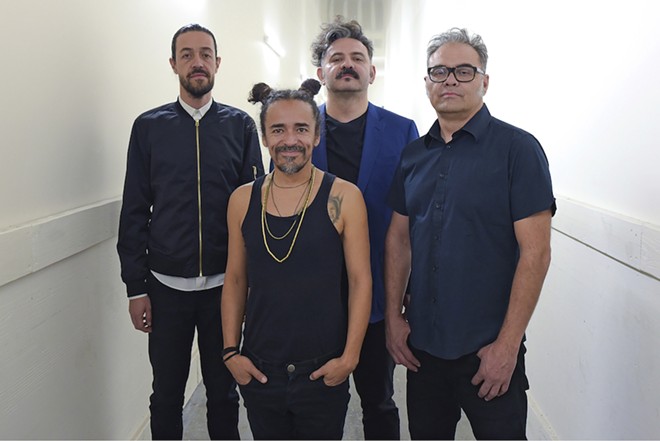 Widely considered the most important rock band to emerge from Mexico, Café Tacvba have been fearlessly stretching the boundaries of rock & roll since the early '90s. From raw, folk-punk beginnings, the band has since restlessly experimented with genres as diverse as hip-hop, tejano and electronic music. They've won Latin Grammys and played Coachella, and the irony of them doing a triumphant U.S. tour as Trump continues blathering on about a border wall with Mexico will not be lost on any of the attendees at their shows.

On his way down to play Miami's absolutely bonkers III Points electronic music festival, the enigmatic bassist/producer Thundercat touches down in Orlando for a hotly anticipated solo stand, touring his new album Drunk, an all-star affair featuring cameos from Kendrick Lamar, Pharrell, Michael McDonald, Kenny Loggins and Wiz Khalifa. Yet despite all that guest starpower, on record and on stage alike it's Thundercat who commands all attention.