(UPDATED!) Terri Binion's "Goin' to California" video, filmed locally, is an emotional masterpiece about the importance of love and equality 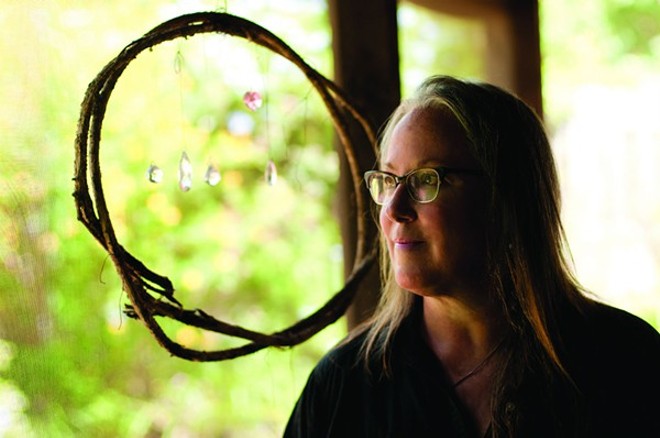 Photo by Darin Back

We were going to wait until Monday to debut this, but it's now out on the YouTubes, so – considering there was already a premiere party this week for "Goin' to California" – we're going to put it out there right now. Why? Because singer-songwriter Terri Binion is one of our favorite local treasures, but also because the translation of Binion's marriage to Tracy Irwin, who passed away in an unfortunate accident at the old Amway Arena while working for Cirque du Soleil in 2011, is a very close and personal topic to the Orlando Weekly. We told Binion's story in detail last November, and you can read all about that horror and unfairness here (with some further musical links embedded). Binion has done the unthinkable and turned her grief into a thing of beauty. We think you'll agree when you watch the video, directed and edited by Michael Finn, below. (Full disclosure: the author of this blog was there the day of its filming, and it was as emotional as it appears; you'll notice the real tears on the faces of a lot of Orlando notables here). Binion, who is launching a new record, reportedly without this song on it and under the management of former Orlando hero Steven Foxbury, this spring, is getting her footing back, playing shows like the one at Will's Pub last night. We will update this blog with more info early next week, but if there's any way to start a thoughtful weekend, we recommend this. Welcome back, Terri. "Our day has come."

We had a quick chat with Binion this morning, March 23, about the video, the inspiration and her forthcoming album!

OW: OK, first of all, the subject matter – the reflection on a much happier time – must have been hard enough to revisit for the song, but when it came time to conceptualize and ultimately record the video, how did you want to present it. You're smiling in it, which says a lot.

Binion: Well, for me personally, because I'm a very private person, not necessarily an activist, I knew that this was the way in which I could get this very important story and message out there, in my own way and naturally. I had a responsibility, I knew that, I just had to get to a point in my grieving, that I was strong enough to put it out there. Mike Finn, our director was also in agreement, that first and foremost, this was going to be about driving the message for equality. We were also in agreement that we wanted to reflect the joy in the song itself. I did worry that I would have trouble performing it and making the entire video, now being in front of the camera rather than behind the scenes. The days just prior to shooting had become difficult, the wound had been reopened after the OW story had come out But at some point you know what job it is that you have to do and you step up. The gathering of supportive and loving friends made it all so sweet and surreal.

That surreal quality really comes out in the closing shots where you're walking through the assembled crowd. Also, with the children on the sidewalk. Clearly it was important to you to have people from all walks of life involved.

I am blessed with company. I am blessed with good neighbors raising sweet, kind and intelligent children. I am a songwriter who is sort of like a Diane Arbus, looking to find the unique qualities in people, whomever I meet. I am a listener and a seeker. I really love people. Everyone has a story and I like to spend one on one time with people, it's one of my favorite things in life.

Another favorite thing is music. Tell me a little about your new album and the decision not to include this song on it.

I'm really excited about the the recording. I returned to Richter Records to record with David Schweizer once again. We made my last cd together and he's extremely talented and even more generous. This cd has been a long time in the making, it's a whole chapter just telling that end of the story. David and I were both going through a lot in our personal lives throughout this whole process and at some point I had the thought that maybe we needed a third wheel, something to sort of knock us around and I approached Justin Beckler about coming on board. The three of us worked really well together and I see us continuing in the future together. We're all three very happy about this record. We do not display as much Americana sound on this recording as my first two releases. It's a bit stronger and a bit more serious in regards to the story telling, You know I love to tell a story. So for the first time in my recording history, I made a record without a mandolin part!! In regards to "Goin' To California" not being one of the tracks, that's truly just a creative choice. It just doesn't fit in the series of songs. Aesthetically, in my mind, who puts their own wedding song on a record, well, besides John Denver? It's kind of like when producers decide to hire a singer to star in their movie, and then they include that singers music in the sound track. It's a little bit too much self on self. I'm very aware of things like that. "Goin' To California" is clearly a single to me.

What's the title and when can we expect it?

It's going to be called, "The Day After The Night Before". The title comes from an inscription I found on the back of an old photograph of my mother, at around the age of 19, and written in her own handwriting. We hope to be releasing this summer!