TALK SAFETY TO ME

;Remember how every ;two-bit singer from Lionel Richie to the Mandrell Sisters insulted John Lennon's memory after his murder by beefing up their security, as if to say, "My God, we could be next"? Made you want to sit those brow-moppers down and say, "Look, you robots will never mean to the world what a Beatle did, not even to a homicidal maniac, so go home to your families, 'cause no one cares enough to send you a bullet bouquet."

;That was a lifetime ago, before dot-com gawkers, celebrity stalkers, player haters and just-plain haters. In April, when Eminem protégé Proof took an argument-settling bullet, did we just accept it as an occupational hazard? The same when Em's other emissary, Obie Trice, got capped twice in the head last December? No.

;That's why we've taken this "Poison Rocker Fears Hitman" story extra-;seriously. Sure, you've thought about murdalyzin' Bret Michaels yourself every time "Unskinny Bop" comes on the radio. But really, you'd be just as happy seeing someone rip that bandanna off his head and expose his hair-farmer drought. Michaels has been determined to extend the shelf life of this story (if you haven't heard, Michaels' vehicles have been shot at twice since the fall of 2005) beyond even Art Garfunkel's pathetic pot-bust media blitz of last year. It appears to have worked. For the first time in 16 years, Poison dented Billboard's Top 200 with The Best of Poison: 20 Years of Rock, which debuted at No. 17. With a bullet? Well awwllriight!

;;Fourteen months ago, the victim was riding in his tour bus, en route to an "invitation-only acoustic show" (read: quickie corporate gig) in Chicopee, Mass., at the Rumble Seat Bar and Grille. "Somebody" shot at the bus. Local police downplayed the seriousness of the incident, chalking it down to "a simple case of vandalism" since the weapon in question was a "pellet gun." But that didn't stop the victim, who's committed to risking bodily harm for your listening pleasure, pledging in his best Adam West deadpan: "It is going to take more than a cowardice act like this to make me stop performing or stop my tour!"

;And in early 2006, an honest-to-God bullet shattered the back window of Michaels' Mercedes while he was on his way to a radio interview. Cynics snorted that if your car has never been hit by a bullet in L.A., you're not getting out enough. But it gave the rest of us something to believe in: Someone wants Bret dead! Let's all get into the Bret mindset and figure out who it is! It ain't nothing but a good time — homicide, that is!

;Here is a list of suspects, in order of ascending probability:

;;Reunion, shmmooonyun! He could still be holding a grudge over the time Bret beat him up in front of Cindy Crawford after a 1992 MTV Video Awards performance during which DeVille played a different song from the rest of the band. It's been thorn after humiliating thorn since then — getting bounced from Poison, rehab, drunk driving, jail time, and playing seventh fiddle to Florence Henderson, Tawny Kitaen and the cast of The Surreal Life 6, on which show he made a reticent Sherman Hemsley seem like an extrovert.

;;Take this to your grave, Michaels. Poison is yesterday's arena rock. Make way for Fall Out Boy, four guys from Wilmette, Ill., who don't fit the emo MO of standing around studying their Thom McAns. Naw, they leap and fuss and rock, and they will kill you if you ever try to bring hair metal back. Don't believe it? We didn't either until the lab unscrambled and analyzed the lyrics to FOB's recent smash "Sugar We're Going Down" and came up with:

;;"I've been dying to tell you anything you want to hear/'Cause that's just who I am this week/Lie in the grass, next to the mausoleum."

;;Lead vocalist Patrick Stump confirms what Bret wants to hear — that someone indeed wants to kill him. The bit about the grass and the mausoleum are cultural references to the Dealey Plaza grassy knoll and TV's Dark Shadows. All of 21 years young, Stump has every right to believe that Michaels is way older than 43.

;;"I'll be your number one with a bullet/A loaded God complex, cock it and pull it."

;Here, Stump makes clear his intent to take BM out of the world as surely as the man upstairs put him in. The thought of Poison reaching single-digit figures on the chart would mean the average record-buying age has risen to 38, which would spell the end of FOB's brief and glorious reign as a premier American Top 10 rock band. He continues:

;"Is this more than you bargained for yet?/Oh, don't mind me, I'm watching you two from the closet/Wishing to be the friction in your jeans/Isn't it messed up how I'm just dying to be him."

;Clearly, the sexually confused Stump has clocked a lot of hours watching the video of Pamela Anderson going down on Bret's manhood and realizes he'd be out of his league on that jungle gym. Schlubby and sporting a slight paunch, he and his anti-frontman antics would be relegated to Gen-Y memory banks should sculpted abs, pecs, onstage cartwheels and 40-something guys with effeminate voices ever return to style.

;;Lead singer for Kix, the forerunners of Poison who went west only to have their entire stage act stolen by Bret and Poison. It was a bitter pill for Whiteman to swallow when the Kix formula of "less hair, less glamour, more songs about cold showers and blown fuses" failed to win them much support from MTV. Whiteman is sticking with his guns, playing in a Baltimore band called Funny Money, and is said to be sporting less-attractive bandannas.

;;Not as outlandish as you might think, since Bret Michaels made his film directorial debut while Suge was incarcerated, with a little something called A Letter from Death Row. And you know how Suge is about intellectual property. Widely believed to have killed Biggie, he now could be making tracks for "Wiggie."

;;Maybe he's blackmailing them with the names of hookers, because the father-and-son team has gotten roped into starring in not one, but two Bret Michaels movies! Behind the scenes, they must be frantic: "How many movies about guys in bandannas does this guy have in him?"

;On second thought, let's go with the police's No. 1 suspect in this case. Professor Plum. In the jacuzzi. With a cattle prod. 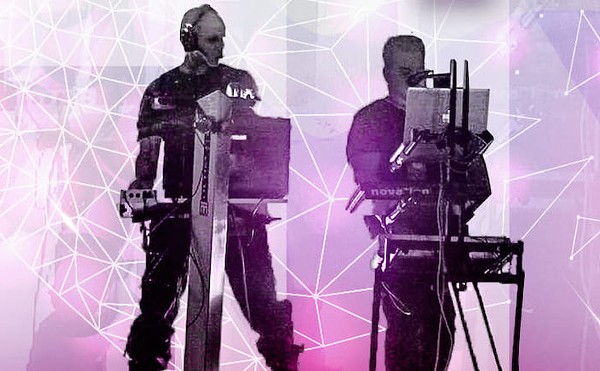