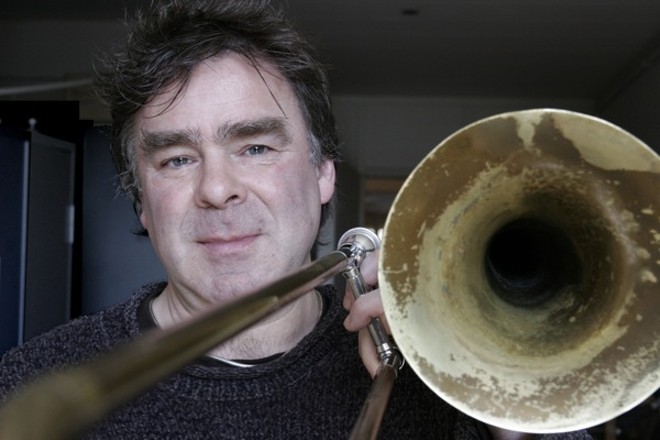 Trombonists Wolter Wierbos and David Manson return to Central Florida (from Amsterdam and St. Pete, Fla., respectively) for the next concert in the 2011-2012 series presented by the Civic Minded 5 at the Timucua house. Equally at home in jazz and contemporary classical – and apparently with Sonic Youth, with whom he collaborated in 2001 – Wierbos is in demand as a soloist and booked internationally through October 2013. As well as some solo works, Wierbos will also perform with Manson on the acclaimed composer’s “Swarm!”, a multimedia piece for trombone octet, tap dancer and LED-illuminated balloons. (That last bit is the inflatable contribution of Polish conceptual artist Wojtek Sawa, whose installation “Untitled #1” called for viewers of a woman wearing nothing but a hula skirt of dollar bills to remove the bills and drop them in a box marked “AIDS research.”) Manson will also perform composer Javier Alvarez’s “Vinko Mambo” for trombone and electronics, a solo tribute to mambo legend Perez Prado. – F.C. Belt