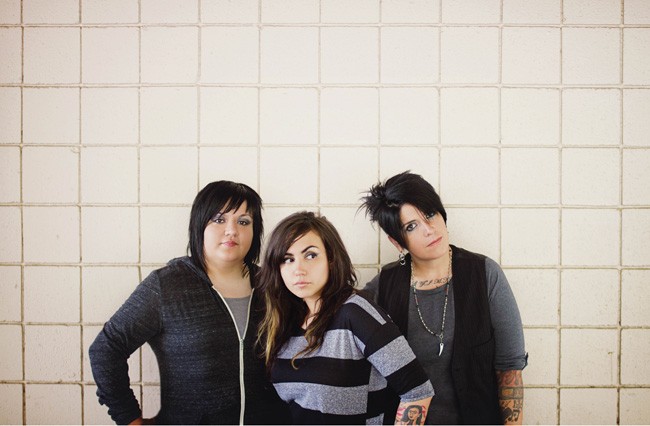 Girl in a Coma

Girl in a Coma

Exits and All the Rest(Blackheart)

With a steadily gathering chorus of notable boosters like Morrissey, who partly inspired their moniker, and Joan Jett, whose label signed them, San Antonio trio Girl in a Coma is rightfully gaining steam. And while their female, Latino and (two-thirds) lesbian stripes make them compelling NPR material, they’re simply and objectively an emerging musical force that carries the light of the female rock torch.

Through a prismatic and not overly slavish blend of alternative and classic-pop melodicism, straight-up rock & roll guts and serious crunch, their music contains both agility and thickness, loveliness and kick. Their perspective is resolutely feminine, but they don’t confine themselves to one-dimensional portrayals of either pretty or tough. In Girl in a Coma’s equation, it’s all part and parcel of something bigger. And in so doing, they render that voice with impressive amplitude.

The supernova center of the band is singer-guitarist Nina Diaz whose big voice is graceful, high-octane and earth-moving. Capable of both conventional and supernatural beauty, her singing is as able and likely to caress as it is to clutch your throat.

Highlights include the slow blossom of “So,” the swaggering garage grind of “Hope” and the unsettled power of “Adjust,” which sounds like a lost Sleater-Kinney track. But the undisputed stars are the punk strut of “One-Eyed Fool,” the perfectly shimmering jangle-pop of “Smart” and the towering rock of “Cemetery Baby.”

Considering the growing relevance of their point of view by virtue of their unique demographics, Girl in a Coma’s music is honest, dutiful and empowering. But beyond all qualifiers, this shining album and their strikingly assertive and confident live performances affirm in no uncertain terms that they’re a legitimately kick-ass band that can run with the mighty likes of Sybris, Screaming Females and Mr. Gnome.