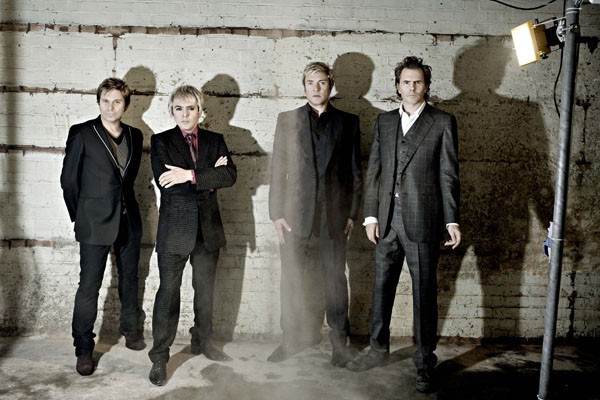 All You Need Is Now
(Tapemodern)

(A funny thing happened on the way to the printing press. We received an advance stream – the anti-piracy norm for major releases these days – of the new Duran Duran album on Nov. 24, and seeing as writer Billy Manes imagines himself to actually be a member of the band, it made for a very special Thanksgiving for some and a tedious one for others. Manes sat on the release until the weekend before his stream was to expire, perused the Internet for any other signs of a review, e-mailed the publicity company with a big “what gives?” as to whether there was an embargo and didn’t find or hear anything. Finally, he gave in.

He posted it at www.orlandoweekly.com late Saturday, Dec. 4, igniting a viral wave of controversy among the still-breathing Duran Duran fanbase – “it’s too confusing,” etc. – until the review eventually landed in album producer Mark Ronson’s sightline. Within 12 hours of the review going live, Ronson linked it to his Twitter account, reporting, “NO IDEA how they got the album already, but a pretty  accurate play-by-play nonetheless.” That brought a record number of hits to our website from fans hoping to read the first review of the amazing new Duran Duran album. The band’s management followed the next day with grinning approval. Manes, it goes without saying, will never be the same. What follows is a  version of that review.)

Somewhere toward the end of Duran Duran’s 13th studio release, All You Need Is Now, a creepy familiarity takes over. “Do you know where we are?” singer Simon Le Bon sidles up next to you in an imaginary limousine for a “Chauffer” ride into metaphoric bestiality. The song is called “The Man Who Stole a Leopard,” naturally, and it stands as the album’s indulgent come-on; a back-and-forth with singer Kelis (she’s the leopard, see) that coasts uncomfortably atop the plodding, synthesized predation of keyboardist Nick Rhodes’ smirking melodic menace; that is, until it ends with a BBC News reporter detailing the fictional “controversy.” You may not be sure where you are, but you’ve been there before.

First, the baggage: It’s virtually impossible to speak of Duran Duran without a quick tumble through the by-now dusty archives, the squeaky plastic of packaging and toothy Thatcherism, the screaming girls and moaning critics. For those of us who found our footing (and hair) in the dual-cassette dubs of ’80s optimism, Duran Duran’s career chart – from luxury to heartache (as another band once said) then back again, sort of – provides a fitting reflection of our own increasingly nostalgic existences. One look at the crows’ feet staring back at us in that state-fair double-“D” novelty mirror – later repurposed for inhalants – can be one glance too many, and all of that ambition and euphoria inspired by puberty lost in a keyboard sequence has gone the way of “Rio” and “The Reflex,” straight into the background office music rotation. “Music is for kids,” we collectively grumble over our morning coffee. Getting old, then.

Kicking in with a jarringly schizophrenic  electro-grind, Le Bon swaggers onto the set for album-opener and lead single “All You Need Is Now,” barely squeezing his legs into the leather trousers of cocksure distortion: “It’s all up to you now / Find yourself in the moment,” he commands. The anthemic chorus lights up like the CG fireworks in the classic “New Moon on Monday” video, floating on a bed of keyboards directly lifted  from that very song. Duran Duran are back, and what’s more, they’re paying tribute  to themselves.

None of this, of course, is by accident. Following the diminishing returns of their multiple attempted comebacks – the last one to take was the accidental beauty of 1993’s “Ordinary World” and its host album – Duran Duran were, if you are to believe the orchestrated hype, rescued by the nimble-if-obsessive production of 35-year-old Mark Ronson. Ronson, perhaps grasping at his own “dusty” novelty mirror in the closet, envisioned a Duran resurrection, one meant to capture the spirit – literally – of the band’s Rio heyday. It would be the “album they never made,” according to expectations, and with few exceptions, that’s exactly what it turned out to be.

And with that, a flood of ’80s paranoia references takes hold. “Blame the Machines” culminates in what is presumably a scantily clad model on a white leather couch dictating, “You are not required to think at all,” to a whizzing Le Bon. “Being Followed” insists that “paranoia” is the “only valid point of view, if you know what I’m saying.”

Le Bon and Co. take a much-needed cigarette breather for the album’s first slow burner, “Leave a Light On,” as close a cousin to “Save a Prayer” as has been invited to this party. “I know, I swear,” Le Bon mournfully assures his own wandering eye as it darts from potential paramour to potential paramour. “If you leave a light on for me, I’ll come there.” But that won’t be necessary, because just on the other side of the sliding glass door, on “Safe,” a track ostensibly about being just the opposite, Scissor Sister Ana Matronic turns up the funk on the console hi-fi (via John Taylor’s inimitable slap-bass); with a shake of her red hair, she hooks her fingers and chants, “Don’t you want to be misled? Don’t you want to be misled?” And there are cowbells.

“Girl Panic!” shows up, as it would, with references to “all the voices in my head / the clever words I never said,” and is clearly so ramped up on whatever sundry enhancements the back bedroom has to offer that it thinks every thought is an FM chorus. In this case, it is. And then it’s out to the limo with “Leopard” Kelis, off to some high rise with a cage in it. The night is over ... almost. As the sky-high chorus of “Runway Runaway” kicks in with an arena-ready “say goodbye,” it’s more of a “hello,” really – a reintroduction to the smeared eyeliner and lipstick that colored the doe-eyed immediacy of Rio’s most celebratory moments. It may not be news, this account of the disillusionment suffered by a lost girl in a man’s world, but it’s still immediate and somehow relevant. It’s music for laughing at the pieces, something Duran Duran have every right to do after 30 years of toughing it out.

But it doesn’t come without a price. A Baroque moodiness rolls back into the proceedings for album closer “Before the Rain,” as a certain sense of foreboding collapses into Roger Taylor’s machine-gun drum staccato. “All rise, you promises broken,” Le Bon stares off into nowhere. It’s an auspicious ending to a generally frenetic experience, a gloomy goodnight for the sake of a good cry.

It would be wrong to give Ronson too much credit for the authenticity and audacity of this very Duran Duran experience. Likewise, it would be wrong not to recognize his deftness at time travel, as witnessed in his coddling of a crumbling Amy Winehouse over pumped-up classic soul or on the temporal triptychs of his own solo output. (He just finished remaking Boy George.)

But the real revelation within the nine tracks presented here is that this gaggle of 50-something heartthrobs is still more than capable of accessing the allure and mystery that made their initial output so inescapable. It seems all they really needed was somebody to tell them that.

(All You Need Is Now is released via  iTunes Dec. 21)