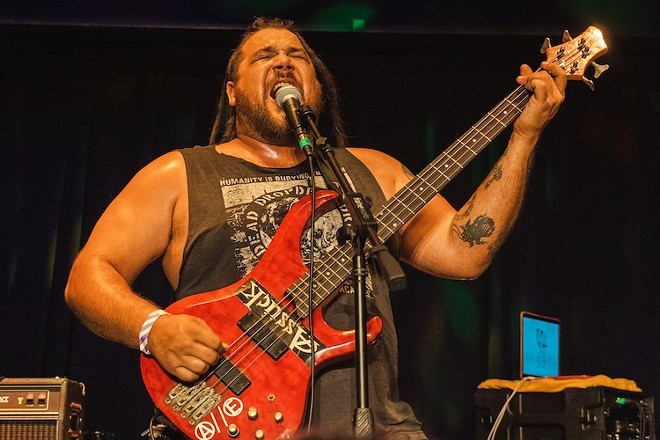 Orlando musician Eric Montanez passed away late last month, and his loss will be felt by our city's punk and larger music scenes for years to come.

Montanez died in a car crash near Bithlo. Reading the news reports — jarringly brief and to-the-point — and attempting to reconcile those with Montanez's outsized influence on Orlando's music and punk activist communities just didn't connect. We've gathered some reflections on Montanez to hopefully give a better picture of him as a musician, an activist, a friend.

Orlando Weekly  readers will be most immediately familiar with Montanez as the larger-than-life frontperson of Orlando death-metal ensemble Human. Out of the many local projects spawned during the pandemic, Human were arguably the most notable.

The band — Montanez (bass/vocals), John Farran (guitar) and Josh Dulcie (drums) — came charging out of the gate with a moniker paying tribute to Orlando metal icons Death and a a stellar album's worth of vicious death-metal-meets-grind songcraft.

Their debut album, Delicacies of Extinction, was released by Philly label Silence is Death (run by Orlando expatriate Jake Smith) in 2021 as a run of cassettes which swiftly sold out. The album got a proper vinyl release earlier this year — and is still available and highly recommended. Human's music impressed many far beyond the boundaries of the 407 area code with their merging of crushing sounds with socially-conscious and (to our ears) compassionate lyrics. Human didn't play out much locally, but when they did, they went down a storm with Montanez out front, going wild.

"Eric was larger and louder than life. He was unapologetically himself and that was his gift to the world," bandmate Farran told Orlando Weekly. "He inspired people not thru words but action. ACTION. He was truly radical, a lover of life and everything that comes with it. He will be sorely missed."

Prior to Human, Montanez was in several other notable Orlando agit-punk projects, including BlacBloc, which later morphed into Republicorpse.

"BlacBloc were the kings of the anarcho/crust/grind/activist punk scene in Orlando," says Orlando music archivist Joshua Dobbs. "[They] were definitely responsible for getting that next crucial wave on young punks going. I know for a fact that Eric was key to that inspiration, and continued to be for the rest of his life."

Montanez's punk ethics and activism didn't end when a song stopped. He was for many years a committed part of a local Food Not Bombs chapter that fed unhoused folks at Lake Eola Park.

"There was never a hierarchy in the history of Food Not Bombs, but he was certainly the glue that held us all together at a time when Orlando punks never went anywhere alone," friend and FNB colleague Sabra Starr told OW.

At the age of 21, Montanez was arrested by local authorities for the apparently heinous crime of feeding people in need, but kept returning to do the work.

"It's not about me," said Montanez at the time. "It's about everybody together, building a real community and being there for each other."

Orlando Food Not Bombs filed a lawsuit in federal court, disputing the legality fo the city ordinance under which Montanez and his colleagues were arrested, and won, though it was later overturned on appeal by the city of Orlando.

"He cared about oppressed and marginalized people and injustice. He tried to do some good in the world, according to his values," said Food Not Bombs colleague Ben Markeson in an email to OW.  "He was a good friend to many who I know will miss him and lament not growing older with him in their lives."

"At his Celebration of Life [last] Monday night, there was over 250 people there from all parts of Florida and other states, as far as the West Coast: Punks, ironworkers, people affiliated with Food Not Bombs, white collar workers, people rom the music industry, people from all walks of life, race and religion and he had touched all of their lives in some way," his mother Darlene King told OW. "It was amazing to see everyone there for him and telling story after story of how Eric had changed their lives and how they tried do better in their lives because of his influence."

"To say he will be missed hardly speaks to the void where his laugh used to be, but his spirit lives on in the hearts of the people he touched and nourished to help us grow," said Starr. "He lives on in our humanity and compassion for each other and the earth."