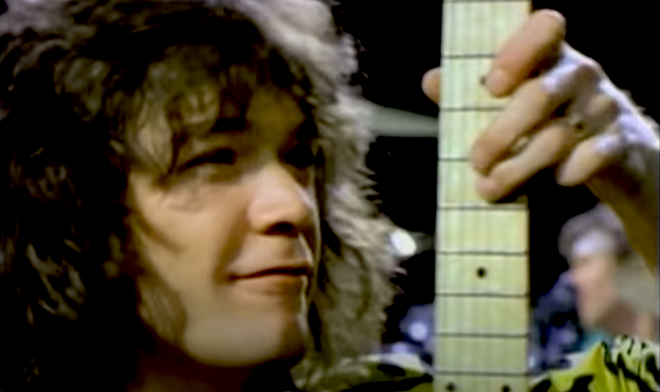 Screen capture courtesy Van Halen/Youtbube
Shock and sadness instantly filled me when I scrolled through the barrage of messages on my cellphone when word broke that the most innovative and influential rock guitarist of my generation, Eddie Van Halen, had passed away.

Having suffered some serious health setbacks through recent years (including having a portion of his tongue removed due to cancer-related complications), the musical future of the monster axeman remained in question for some time. But, as Van Halen's 29-year old musician son Wolf recently announced on social media when he broke the terrible news, his dad had succumbed to throat cancer at age 65.

Recognized as a hotshot guitar virtuoso, keyboardist and songwriter for the band that shared his name, Eddie Van Halen was, without question, one of the most recognizable and emulated musicians of his era.

Founding Van Halen, the dynamic hard-rock band with his older brother and christening it with their family name, success was almost guaranteed for the California-based group. Bursting on the scene with their 1978, bombastic, self-titled album, the world took note of the new quartet that cut their teeth making the rounds throughout the Los Angeles club scene. Although the group boasted the infectious stylings of lead singer David Lee Roth, the solid bass lines and vocal harmonies of Michael Anthony, and Alex Van Halen’s solid, booming drumming, it was lead guitarist and wunderkind Eddie Van Halen whose work garnered the most attention.

Creating his own sound and style that sounded like nothing else that had come before, Eddie Van Halen swiftly and solemnly redefined the role of the modern-day rock guitarist. His reputation and his prowess grew exponentially with each subsequent album and his fanbase continued to expand. Ask any kid who took up the electric guitar during the salad days of Van Halen’s remarkable run of albums from 1978 to 1984 and, chances are, they were attracted to the six-string by the intricate leads Eddie Van Halen laid down on the group’s records.

“Guitar hero” is a term that’s thrown around a lot but I can’t think of anyone who earned that badge more deservedly than the half Dutch/half Indonesian musical wizard who never learned to read music but created his own musical empire nonetheless.

Courted by fellow musicians and contemporaries Michael Jackson, Queen’s Brian May and hip-hop giant LL Cool J throughout his career, Eddie Van Halen was rightfully recognized as the consummate guitar slinger. Following his original stint with Roth as his bands lead singer, Van Halen also lead a successful run with singer Sammy Hagar at the helm and continued his hot streak of platinum-selling albums while never compromising or selling his talents short.


From a personal standpoint, being a Van Halen devotee didn’t fit into my punk rock/new wave agenda at the time the band was enjoying their highest-charting single, the unavoidably catchy 1984 pop hit, “Jump.” I was, however, drawn to the live concert clips that received regular MTV airtime throughout the mid-’80s. Lifted from touring behind, arguably, the band’s best album, 1981’s Fair Warning, getting to see Roth oozing charisma matched by Eddie Van Halen’s jaw-dropping guitar skills during the live videos for “Unchained” and “So This Is Love?” made being a VH fan indisputable for me. Despite tags, labels and musical identities, I was drawn to the band and, to this day, I attribute those songs, performances and that album in particular for transforming me into a lifelong Van Halen fan,

It’s sobering to think about what the musical landscape would look and sound like had Eddie Van Halen never picked up a guitar and redefined its place in the world of rock music. His talent will never stop inspiring both novice guitarists and seasoned pros and the many records he recorded and released during his all-too-short time on earth will never lose their pizzazz.

Farewell to the great, inimitable Eddie Van Halen. May he and his music continue to “Light Up the Sky” for a long, long time …