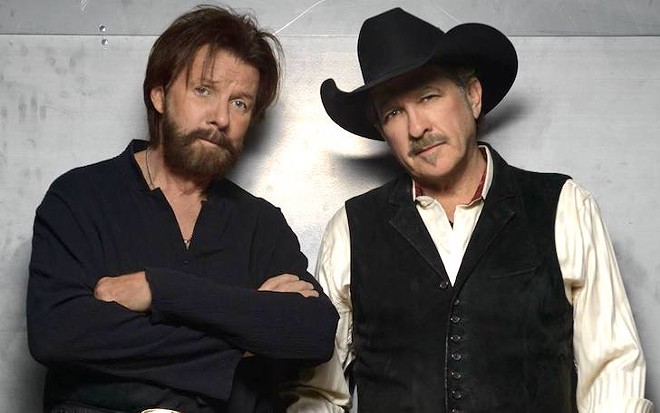 Photo courtesy Brooks and Dunn/Facebook
Back in the late 1990s, you couldn’t turn on a country radio station without hearing at least one of Brooks and Dunn’s popular singles, like "My Maria" or "Ain't Nothing 'bout You." The dynamic duo that once dominated the scene is back with a new album and tour announcement, and luckily for Tampa Bay country fans, Brooks and Dunn will play the MidFlorida Credit Union Amphitheatre on May 29.

Kix Brooks and Ronnie Dunn played the same Tampa venue a decade ago on their farewell tour. Riding off the excitement of their new album Reboot and 2019 induction into the Country Music Hall of Fame, Brooks and Dunn, now in their mid-60s, decided they weren’t quite done yet.

Brooks and Dunn’s nationwide Reboot 2020 tour shares the name their most recent album, which was released last Spring.

Tickets for Brooks and Dunn’s Tampa show will be first available as a part of the Livenation Country Megaticket, and then will go on sale to the general public at livenation.com soon after