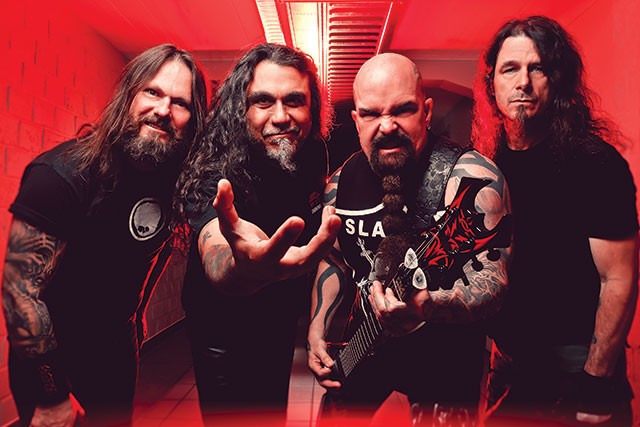 The devil: Despite accounts suggesting he’s more of a blues fan (“The Devil Went Down to Georgia,” Robert Johnson’s career), heavy metallers have tailgated outside his stadium for decades. Slayer kicked that party into high gear in the 1980s, but just how Satanic is each of their albums? Anticipating the band’s newest (due out in 2015) and preparing for this week’s show, we present a ranking of Slayer’s previous efforts, from most devil-glorifying to least.

(out of 5)
Old Testament nastiness oozes from the dour cover and makes all other album art look comical. The music mostly pertains to human evils, but closing classic “Raining Blood” is Wagnerian in its Satanism, outlining a banished soul seething to murder all of heaven’s angels.

(out of 5)
Boasts a dense cluster of demonic-themed tunes (“Darkness of Christ,” “New Faith,” “Cast Down”). Released on 9/11, the original artwork featured a desecrated Bible bearing Slayer’s logo. Despite all this, God Hates Us All actually earned a Grammy nomination. Maybe that makes it more evil?

(out of 5)
This could have been a collection of Falco covers and it would still get a high ranking just for the name Christ Illusion. Succinctly blasphemous.

(out of 5)
Guttural, hard-charging, unrepentant. The blueprint for death and black metal. Loses points because it’s a three-song EP. It’s hard to convert anyone in 15 minutes, even when you scream “the holy cross, symbol of lies!”

(out of 5 stars)
Begins with frightening backwards whispering. Unfortunately, the overall production is hollow. Kinda feels like you’re riding in a car next to the devil.

(out of 5)
The title is Latin for “the devil in music,” and the bald figure on the cover could be Lucifer himself (it also could be Mr. Clean dressed as Lucifer). Musically hellish enough to get you through black mass without dozing off.

(out of 5)
Something diabolical is present, but you gotta dig to find true hellfire.

(out of 5)
The serial killer tribute record. If you believe folks like Andrei Chikatilo were motivated by Mephistopheles, then throw up your horns. Keep in mind, though, not even David Berkowitz was deemed “too Apollyon” to stand trial.

(out of 5)
Drummer Paul Bostaph makes his debut here; Bostaph sounds like the moniker of one who serves Ol’ Scratch. Alas, Satan takes a backseat on Divine to Earthly evil like Dahmer and Rush Limbaugh.

(out of 5)
About as unhallowed as your average Hammer horror film. To be fair, the boys were still finding their way. Elements of NWOBHM (New Wave of British Heavy Metal) and glam murk up the stew. Still, the guitar solos cut like a sacrificial knife.

(out of 5)
The beginning of Slayer’s “commercial” stretch, aka they got a video on MTV – you know, the one where they’re rocking out in Egypt. They mention Beelzebub only in passing, which some might call a sellout move.