The Business
British oi! punks the Business return for a rowdy party with Orlando ruckus-makers the Attack for guaranteed flailing fun.
8 p.m. Wednesday, June 3, at Backbooth, $10

Curren$y
Already this year, the saucy rapper has released a full-length, Pilot Talk III, as well as a new EP, Even More Saturday Night Car Tunes, attacking the game with alternate marketing strategies for each. For Pilot Talk III, fans had to hit Jet Life Recordings’ website (the rapper’s label) to buy a $100 USB key and unlock the critically favored album. It certainly creates buzz and demand while more casual (read: more broke) fans made do with the EP, which you can stream on Spotify and find basically everywhere you’d expect to find new music. The reward for those who jumped on the third leg of Pilot’s flight, though, was the rare sound of Curren$y soberly spitting about his early career setbacks. Read more.
7 p.m. Thursday, June 4, at Venue 578, $30-$50

Blueprint
As if we're not already blessed by innovative hip-hop head Blueprint's frequent dips back into our state from his native Ohio, this lineup is further electrified by local fire from Midaz the Beast.
9 p.m. Thursday, June 4, at the Social, $10

Turbo Fruits
Is it possible Turbo Fruits accidentally gave their album the wrong name? Instead of the raging punk tremble of previous releases, No Control is almost bizarrely even-tempered and their most polished effort to date. The Nashville garage rockers swapped “Sweet Thang” (Butter) for No Control’s sweetheart/“Favorite Girl” amid the album’s other more straightforward discussion points. Call it maturity, maybe. Read more.
8 p.m. Friday, June 5, at Will's Pub, $10-$12

Obituary
Forever shaking Central Florida metal heads to lift their heavy lids and rise up in the pit, Obituary unexpectedly shreds through Sanford’s West End Trading Co. this week. So wake up before you miss their 30-year thrash, because this is not part of any tour or multi-city experience. This is a Florida-only exclusive date. Read more.
7 p.m. Saturday, June 6, at West End Trading Co., Sanford, $20-$25

Smashington 2015
Check out a full day of music featuring a range of artists including the Bloody Jug Band, the Groove Orient, American Party Machine, Mad Illz and much more.
2-8 p.m. Saturday, June 6, at Anthem College, $15-$25

Guantanamo Baywatch
"[It's} not even like we're trying to do something for an aesthetic, it's just I love this kind of music," says guitarist and vocalist Jason Powell. "And I don't want to be copying it. I'd like to be included in the canon of that kind of music legitimately." Check out our interview with Guantanamo Baywatch.
8 p.m. Sunday, June 7, at Will's Pub, $10-$12 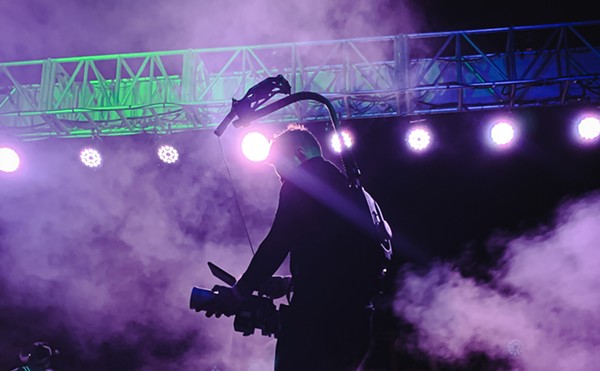