The Delusionaires
When Khan and his wife AnnMarie booked the Dels' first show without consulting the band – because at that point, there was no band – they had exactly three weeks to not only practice material, but also to find out what kind of sound Khan was going for. As Mondello describes it, "Loose drums, flopping bass, the drunken sax careening through it all, and this moronic guitar kind of barking out." Read more.
9 p.m. Wednesday, Dec. 31, at Will's Pub, $10

American Party Machine
Ditch the pomp and embrace the circumstance with Norsekorea’s White Trash New Year’s Bash. Shove a 10-foot beer bong in your face to impress your date, saddle up at the Straw-Ber-Ritaville bar for some saccharine-sweet dranks or partake in the “longest PBR- can wizard staff” contest. They’ve got it all – including live music by American Party Machine! - Brendan O'Connor Read more.
10 p.m. Wednesday, Dec. 31, at Backbooth, free

Billy Joel
If you’ve got an Uptown Girl who loves the BJ then you better Tell Her About It, because he’s playing the Amway tonight. - Erin Sullivan Read more.
9:30 p.m. Wednesday, Dec. 31, at Amway Center, $150

Aahz Decade II
At any rate, the AAHZ phenomenon at the Beacham is giving itself a “Decade” sequel on New Year’s Night (because hair of the dog?) and Rabbit in the Moon’s David Christophere is headlining, along with stalwarts DJ Icey, Kimball Collins, Dave Cannalte and Chris Porter. Five hours of regrets are certain to follow, so you obviously have to be there. Rave. ’Til. Dawn (or 2 a.m., really). - Billy Manes Read more.
9 p.m. Thursday, Jan. 1, at the Beacham, $20-$50

The Hi-Life
Kick off the new year with a pop-punk reunion featuring the Hi-Life along with a super-fun bill of many of Orlando's favorite punk/ska bands: Caffiends, the Areolas and Control This!
8 p.m. Thursday, Jan. 1, at Will's Pub, $6

Propagandhi and War on Women
In addition to punk messiahs Propagandhi, whose legacy in political punk dates back to the early ’90s, hardcore feminist punks War on Women join up, pairing with Propagandhi this year to tour in a massive, righteous move toward combating human rights abuses through heavy, intense live music. Read more.
7 p.m. Friday, Jan. 2, at the Social, $20

Nostradogmus
If you like scrappy acoustic punk with gruff vocals, you're going to dig this new Dead Yetis-affiliated project, and not just because I wanted to make a dog pun – also because even the super-lo-fi Bandcamp recordings give you feels.
10 p.m. Saturday, Jan. 3, at the Space, $5

Clutch
Influential rockers Clutch tear up House of Blues this week with Torche and Lionize on a stacked bill that would've been plenty heavy with any one of these bands, but is beyond loaded with all three.
6 p.m. Sunday, Jan. 4, at House of Blues, $20

Jazz Tuesdays
The Chris Charles Quartet livens up the Smiling Bison every Tuesday with a revolving lineup of sensational players who aren't by any means dainty dinnertime background music.
7:30 p.m. Tuesday, Jan. 6, at the Smiling Bison, free 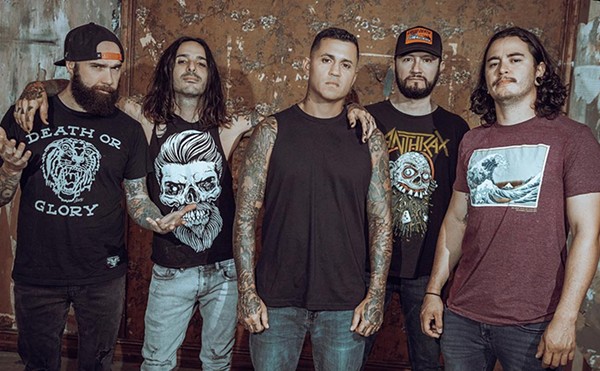