All eyez on me 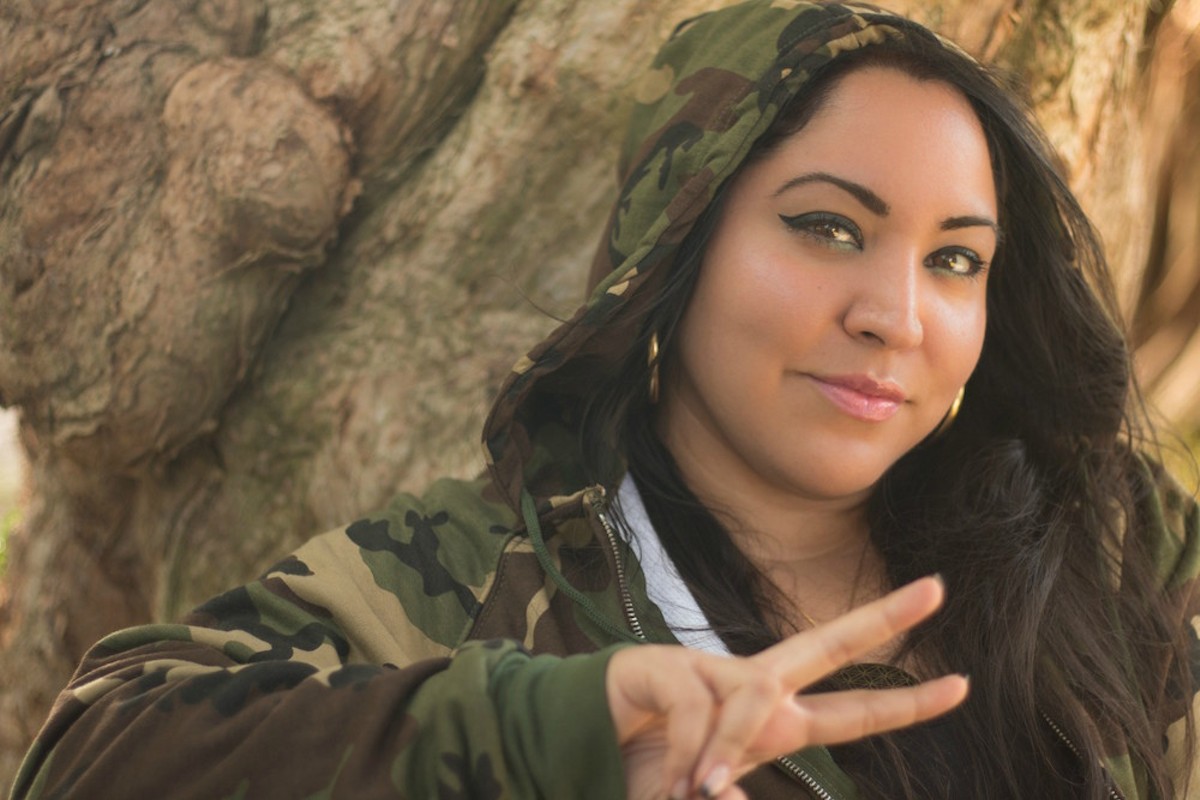 Even from the start, E-Turn was special. The Orlando rapper burst onto the scene earlier this decade with an acrobatic style that was chiseled fire. Her delivery was technical, dense, bulletproof – flaming any mic she stepped up to. Only days before her debut release party back in 2013, she made a splash by jumping into a cypher at a KRS-One show and bringing down the house, stunning the Teacha himself and going viral.

Since then, experience hasn't just sharpened her voice; the very world around her has injected it with extra resonance and urgency. In times defined by paradigm-trembling battlegrounds like the #MeToo movement, racial tension and globe-rocking Middle East fallout, E-Turn stands at the crossroads, situated to become one of the most now voices of this generation.

Born Eliza Azar Javaheri, E-Turn is the rising new American face, a child of mixed ethnicity with an Iranian father and Hispanic/Native mother. Thoroughly an Orlando product, the 30-year-old MC has risen in the city's rap scene as part of the Second Subject Recordings crew shepherded by accomplished rapper Swamburger (Solillaquists of Sound).

"Music has always been what I've wanted to do, I mean since I was a baby," says E-Turn. "I've been singing my whole life, I started rapping when I was in about seventh grade." She started getting serious in 2011 and quit her job upon releasing her first album to chase the dream.

"I had people backing me," she says. "I had Swam backing me. And you know, he's so well-respected in the scene that I'm like, OK, I got something. That was giving me a lot of inspiration and hope and faith that I could actually do this."

That tailwind propelled E-Turn through two locally acclaimed albums with DMC champion DJ SPS. On record and on stage, she solidified herself as a pre-eminent hip-hop force with an elastic, true-school style built on high technique and precision craft – no mumble-rap bullshit here. She gigged hard, racking up notable tours with indie-rap luminaries like Dessa, Qwel & Maker and a procession of Rhymesayers artists including Blueprint, DJ Abilities, Abstract Rude and Grayskul. This year, all of that grind finally culminates for her.

E-Turn's Young World just dropped Sept. 28, and it's a milestone significant in ways both professional and personal. Though this is her third album, it's her first solo one. Moreover, it's being released by distinguished national profile on Fake Four Inc., the Connecticut imprint founded by brothers Ceschi and David Ramos that's perhaps the most progressive hip-hop label in the game right now with a forward-minded stable that's included genre expansionists like Astronautalis, Moodie Black, Busdriver, Sadistik and Bleubird.

Although crackling with Swamburger's classic boom-bap production, the tapestry on Young World is more modern and expansive than just traditional hip-hop, a deepening of the collaborative dance between E-Turn and Swamburger. Besides the textbook combination of crisp breaks, gunning rhymes and sharp cuts, the album makes time to breathe some soul ("Being About It" and "Indigo") and showcase a widened vocal palette from E-Turn with more singing than ever.

More than just a voice, though, what makes E-Turn particularly crucial is that she brings a point of view. Even with all the identity politics that converge in her person, much of it is dealt with through an intensely personal lens, an angle that makes her lyrics especially relatable and resonant. These are lessons from life, not the pulpit. Alongside her patent toughness are open examinations of the mental and emotional difficulty that underpin it ("Stumble"). But from that pressure came a diamond, a document of her journey, what she calls "struggle but with hope."

The intersectionality within E-Turn is so extraordinary and exponential that it gives her national emergence a hint of destiny. However, her insistence on a gold standard of excellence – in herself, her fellow sisters, any hip-hop hopeful whatsoever – may be the thing that certifies her cred. Laying it down, E-Turn says, "I think that in hip-hop, for women, it's just all about killin' shit. It's not about how I look or what I'm willing to reveal. It's all about artistry. And I think it's really gonna push the standards of not only hip-hop in general – because I inspire men, too – I think it's gonna push the standard of women in hip-hop. I think it can shift things ... I do believe I'm a voice for that."

About the impression that E-Turn seared into KRS-One's mind back on that fateful night at the dawn of her career, the legendary MC returned the favor by making a big cameo in her brand-new video for "Nowadays." And so she stands, mic in one hand and the hip-hop torch in the other, ready for the world.