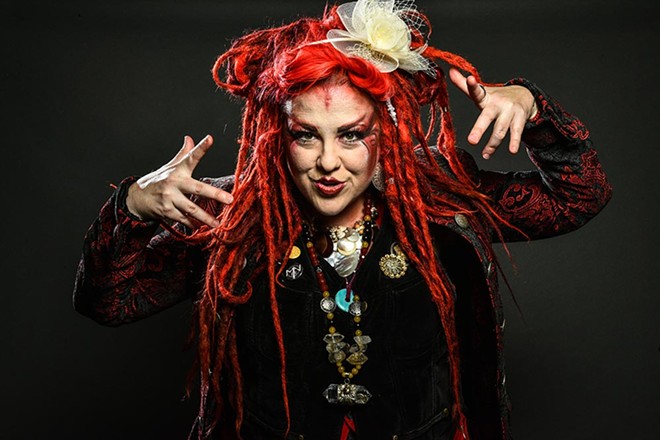 Photo by Dean Karr
2023 is shaping up to be the year of Ms. Meka Nism

Even die-hard fans and followers of Orlando musician and artist Ms. Meka Nism are going to see bold new sides of her creative life in 2023.

As the year begins, the iron-lunged singer has her metal project Meka Nism on pause, giving her time to devote to solo music, theatrical projects, reissuing music from her vast archive, mentoring other Orlando musicians and her recent appointment as president of the Florida chapter of the Recording Academy.

For Meka, the initial catalyst for this crowded slate of eclectic endeavors dates back to the early days of the pandemic. “We all have been faced with reinvention because of quarantine and the COVID years,” explains Meka. “The past couple years I’ve been able to look, back but with fresh eyes, and realize that people are ready for different approaches. There’s less boundaries between genres now.”

This realization led to Meka going full-bore with her solo projects — though she stresses that Meka Nism the band still very much exists — releasing the lush single “The Day Fell” in collaboration with Violectric’s Michelle Jones in late 2021.

It was, in many ways, the beginning of a fresh chapter for her. Finding this new avenue for her voice soon led to working with Apex Arts Studios on releasing unreleased and overlooked works far outside the metal realm. But to Meka it’s all part of her same love for telling stories through music.

“I can be very loud. I also can be very dynamic, I can be gentle. I can tell a gentle side of a story,” says Meka. “I love being a storyteller and … there’s a different story that comes through vocally. I’m the same vocalist, whether I’m doing J-pop or metal or folklore or musical theater.”

This weekend, in fact, marks the digital re-release of a lost solo acoustic album of “heartbreak songs” called Mad to Love through Apex Arts. She’ll be marking the occasion Friday, Jan. 13,  in Sanford as part of her continuing performance residency at the Alley. She promises a load of special guests for this show, including Josh Gluck, Florizel Dennis and Brian “The Vegan Black Metal Chef” Manowitz (drumming, though, not cooking).


The increasingly rare phenomenon of a performing residency is something that Meka warmed immediately to, using each one of this series of acoustic shows to showcase both her own vast body of work and the songs and sounds that shaped her as an artist.

“This series is for showing a range of genres, not just for myself but really celebrating all the people I get to work with,” says Meka. “It’s more of a celebration of Central Florida culture.”

Mad to Love is one of many reissues Meka has in the works, which will eventually include an album of unreleased Origami Girls songs — Meka’s Shonen Knife-esque project from when she lived in Japan over a decade ago.

Looking forward, Meka’s musical partnership with Jones continues apace with the two hard at work on a rock opera spinning off from their initial collab. With two virtuosic performers who each have a serious flair for the visually dramatic in their musical “day jobs,” it’s hard not to have high expectations.

“The rock opera is going to mix the rock and metal world but be as true to opera as possible,” says Meka. “But it will be a bite-sized one that’s digestible for our current generation’s attention span. What’s most exciting for me is that the opera is where we came from for all these deep stories. The goth kids, you know, 150 years ago, were listening to opera!”

When discussing what else 2023 has in store for Ms. Meka Nism, one has to pivot from the creative side of music to the business side, because — at the risk of sounding glib — she’s got a lot on her plate. But Meka is gratifyingly willing to share this hard-won knowledge with her creative community, particularly as founder of the Orlando Songwriters Society.

She’ll be hosting a roundtable discussion on Friday, Jan. 20 at the Melrose Center with Steve Lane of Florida Songwriters Association to talk the business of music: royalties, recording and all the non-glamorous nuts and bolts of the rock life.

“If we’re going to get the next generation, no matter how old they are, but just the next round of soundtracks for our generation. We need to educate each other. My willingness is to ask the questions,” says Meka. “What I’m trying to do with Orlando Songwriters Society is get people to support each other.”

And on top of all that, Meka is gearing up to head out to L.A. for Grammy week to rep Florida as the first Orlandoan to head up the state’s chapter of the Recording Academy in over two decades.

“Serving as president I get to represent both Florida and Puerto Rico,” says Meka. “It’s such a cool opportunity to have a president from Orlando at this moment in time because the personality of Central Florida is just exploding. There’s so much diversity and excitement.”


“This series is for showing a range of genres, not just for myself but really celebrating all the people I get to work with. It’s more of a celebration of Central Florida culture.”


That commitment to repping Central Florida even comes down to wearing clothes and jewelry from Central Florida artisans and designers only for glitzy Grammy events. Details matter. “I’m just trying to wear as many artists as possible from Orlando because then I feel like I’m taking Orlando with me to the red carpet,” says Meka.

Beyond the obvious glamor of the Grammys, Meka takes her position in the music business seriously as a means to foster new talent and new voices. “I’m here to help be a bridge to take people on to the next level whenever we can, because that’s what we’re here for. Right? To help each other,” she concludes. “None of us are in this alone.”