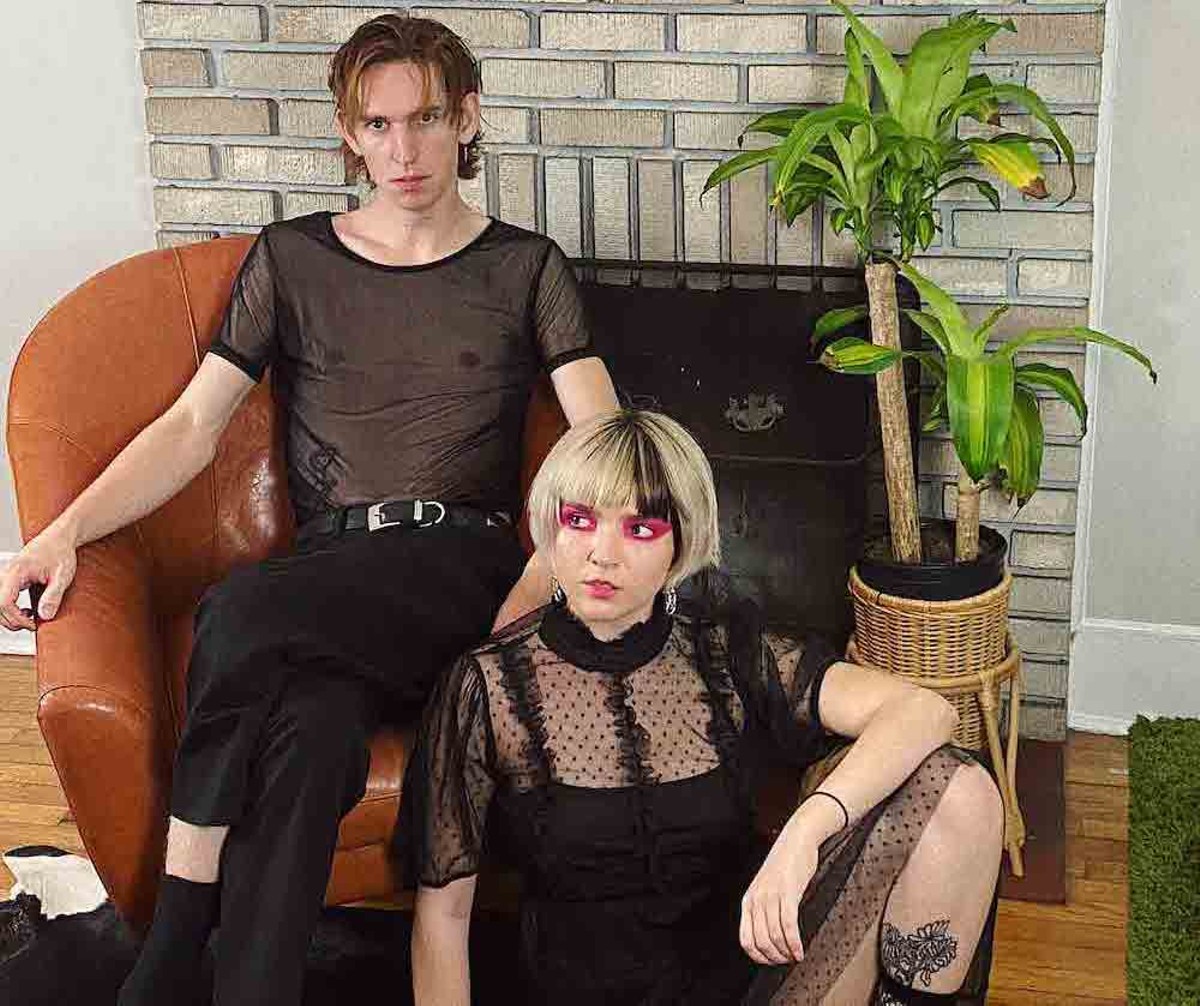 Soon enough, the two would be a couple — "Pretty much the second Sam was on the market, I was buying," quips Dee — and, inevitably, they would begin collaborating.

"We started writing songs together pretty much immediately," says Dee. "We probably wrote 10 songs before Body Shop. And I think each one was in a new genre."

What came after that was a handful of focused songs that became an EP, FL3SH WORLD, distinguishing Body Shop as one of the most promising new bands in the Orlando underground. The sounds Body Shop create are spectral, humid, minimal and jagged, full of longing and defiance.

Listening to the album, we heard flutters of the Gories, the Shangri-Las, X, Bratmobile, Beat Happening and Pylon. And we saw a look that calls to mind the Cramps' Poison Ivy and Lux Interior in all their vampiric, trashy grandeur. And that visual linkage is fitting when we observe in-person the level of creative telepathy and affection that Dee and Crow have for one another.

Body Shop's music came about at least partially as a result of the pandemic and partial lockdown last spring. Spoon Dogs went on hiatus. Unfairly, though Red Rodeo had just released an amazing debut album — Warning Shots — it got lost as the world shut down. Soon enough the band dissolved. This left Crow and Dee with time on their hands and space to try something new, to create just for the hell of it.

"We recorded one song, we didn't know it was going to be anything," says Dee. "When the pandemic started, during that week or so, Sam got sent home from work. And I wasn't working at the time. ... I was writing lyrics constantly. And then Sam would drum to what I was saying,"

"I jumped on the drum kit. And then it just instantly clicked," says Crow. "Like, wait, our sound, whatever this is, is whatever just happened. This drum and vocal primal-pop is what we're going to do."

"We found what we were looking for," underlines Dee.

The duo speak enthusiastically about a two-week writing and recording session in Michigan in the dead of winter, snowed in with zero distractions. They talk about a stop at Third Man Records in Nashville en route and the sonic inspiration soaked up there. There was a feeling of urgency to get the quicksilver, mysterious songs down on eight-track tape and "to get into the mindset of what Body Shop is," in Crow's words. The songs came fast and furious, with the twosome playing and recording every note themselves.

The breakneck pace kept up when Tallahassee label RIP Records stepped up to release the album on tape. Yet Crow and Dee experienced a rush of conflicting emotions when FL3SH WORLD was complete.

"I feel that it was like watching a dream crystallize," offers Dee. "Finally getting to watch it come together in a way that was better than I could have anticipated."

"I think it was also scary," confesses Crow. "I think we kind of sound a little confident right now. But I know making the music we were not super confident."

"There was a point where I said that I hated it and can't put this out," remembers Dee, "right when we finished it."

Body Shop is expanding into a full band next. Musicians have been recruited and rehearsals are beginning. Crow, meanwhile, is happy to balance both his musical outlets. "Spoon Dogs are working on an album right now," he says. "It's like, 'OK, this week is Spoon Dogs. Next week is Body Shop.' ... And that's just been the best fit.'"

There's a touchingly full-circle element to this story, in that FL3SH WORLD is being released into the world during the waning (claws firmly crossed) days of a pandemic, whereas one year ago Red Rodeo's album was released at the very beginning. Is this a happy ending? We'll take it.

For the members of Body Shop too, the album represents finding hope and comfort in hopeless times. "At least in terms of lyrics, I wrote a lot of that when I was going through a lot of turmoil emotionally," explains Dee. "I want the lyrics to destigmatize mental illness and not in a way that romanticizes it, but shows that there is relief, and for me it can definitely be found through music."