Liv Jones
Chris Corsano & Bill Orcutt at the Gallery at Avalon Island
The recent Chris Corsano and Bill Orcutt performance (Dec. 28, Gallery at Avalon Island) was a lucky convergence of many forces: music, minds, holiday schedules. And even though it was sort of an unexpected show even for its chief presenters the Civic Minded 5, they just couldn’t sleep on the fate. Luckily, nor could the full house in attendance. Liv Jones
Chris Corsano & Bill Orcutt at the Gallery at Avalon Island
Individually, the duo packs heavy experimental credentials, with guitarist Orcutt a principal in Miami noise-rock icons Harry Pussy and drummer Corsano a collaborator to a dizzying list of titans like Björk, Thurston Moore and Jim O’Rourke. And their gestalt was a transmission from the edge.

Liv Jones
Chris Corsano at the Gallery at Avalon Island
Instead of the usual gallery floor that’s used for the In-Between Series, this show was placed in the upstairs room that used to be DMAC, which was nice to see in use again and something that gallery director Pat Greene tells me he hopes do more of soon. Invoking noise, jazz and improvisation, Corsano opened with an individual display of experimental sound ingenuity. Involving a full drum set alongside a whole bag of other items – metal, cup, string, bow, horn, plank – the result was an entire world of sound beyond conventional percussion.

Liv Jones
Chris Corsano at the Gallery at Avalon Island
With that setup, I probably cleaved the reading audience right in two: the intrigued and the dismissive. To the latter, I get it, and I sympathize. But be clear, Corsano’s playing is a thing of highly structured movement and skill despite its improvisational mind. This is not some conceptual but undisciplined art vomit. Now, his rhythmic command is certainly exceptional. What puts him on another stratum, however, is his expressional breadth. I like drums a lot, and it doesn’t take more than good beat architecture to do it for me. But while most drummers focus on structural exercises in their solos, his performance – all uninterrupted 20 minutes of it – was a complete sonic piece unto itself, with not just bones but body, head, voice and soul. And it was a revelation.

After a brief intermission, the two assembled – no, collided – for the ensemble set. Before even a note for it was struck, however, there was the harbinger of Orcutt’s amp, which was covered in soundproofing acoustic foam, turned to face the wall and still came with a public warning of its force from the man himself. That’s starting off on the right foot there. Liv Jones
Bill Orcutt at the Gallery at Avalon Island
Once he laid in, it was loud as advertised. More than the volume though, Orcutt’s extremity really comes from his attack and intent. Like a noise cowboy, his avant-garde sound invokes punk, blues and folk in rare and outside ways. The onslaught is immediate and undeniable. But even while his fingers freak it out and rev the nerves, there’s a surrounding atmosphere and tone to his playing. Sometimes it’s drone, sometimes it’s twang, but it’s all evocative of a habitable space beyond just pure technique. It’s also consuming. Although not on mic, Orcutt would often become so poured into what he’s doing that he would verbally wail along to his guitar playing. And with its surgical creativity and fury, Corsano’s drumming was both the sturdy framework that anchored everything and an equal detonating force. 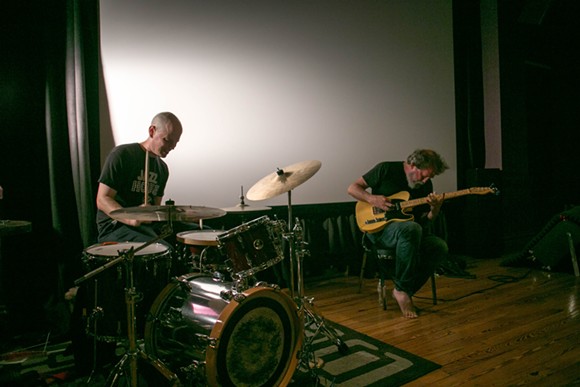