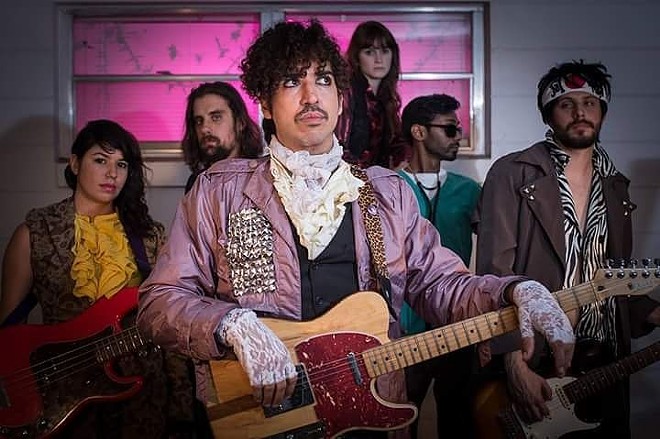 Image via Gerald Perez
Not Prince & The Revolution
With apologies to the recent Prince burlesque show and the DJs at tribute shows who dug deep into their caches of import singles and bootlegs, Gerald Perez and his Not Prince & the Revolution might be the most all-in, both conceptually and sonically, in paying their respects to the Purple One. Also knows for playing in Thee Wilt Chamberlain and solo as Maximino, Perez answered a few questions about walking in the footsteps of Prince. Not Prince and the Revolution makes a rare appearance this Sunday at the Abbey.

What was your first experience with Prince's music?
I would have to say Batman (1989). I was only a year old when that movie came out, but it's one of my most worn out childhood VHS tapes next to the Indiana Jones series. For a child it was certainly a dark film, thematically and visually. But then you have these moments, like the Joker's parade and the sacking of the art museum, that had these super funky, bright and colorful Prince tunes that rounded out the dynamic. Tim Burton was extremely lucky to have Danny Elfman write the score AND Prince the write the soundtrack! That's film music history

Tell me about the first time you covered a Prince song, what kind of pressure did you feel?
The first time was for the 30th Anniversary of Purple Rain. We did a tribute at Will's Pub in January of 2014 of the entire album. I didn't realize how big it would be until probably 5 days leading up to the show. The tunes alone are some of the most challenging pop songs I have ever performed. The thing with a Prince performance though, is that you have to have more than just musicianship to get through these tunes. You have to have style, charisma and moves. I mean, I was going to sleep with the film playing on my laptop EVERY night just to ingrain Prince's mannerisms. I was having dance rehearsals in the afternoon, and come midnight when all my band members were off work we would lug our equipment and PA up the fragile steps of The Space (RIP) for rehearsals that would go well into 3 a.m. I put that weight on my shoulders because a tribute to Prince requires that, and the people deserve it.

Prince live has a heavy visual element, what era are you bringing to the table that night?
We are sticking with Revolution era, primarily when Wendy and Lisa joined the band around 1982 I believe

Who are the other members of the Revolution for the night? Will you do it again?
Bethany Avello (bass/vocals), Jasper Bleu (guitar/vocals), Erin Butler (keys/vocals), Daniel Drennen (drums), and Adam Ibrahim (synths)
This will be our fourth Prince tribute, and after every performance the mindset is 'This is the last time." But, as I have experienced, never say never because anything can happen

Tell me about the other bands on the bill?
Not Morris Day and the Time is a Eugene Snowden-fronted group, and Not Apollonia 6 is a Meg McNash (Former OG of The Space) group. We had both acts opened for us at the Purple Rain Tribute back in January 2014

Where were you when you heard the news that the Artist had passed away?
I was at work. It must have been sometime after 1 p.m. when a co-worker came into the kitchen and (at the time I thought she was joking) yelled that Prince had died. I spent the rest of my shift outside in disarray , trying my best to hold back emotions until I could go home. I have a copy of the self-titled album in my car, so I blasted "I Wanna Be Your Lover" on repeat the whole way home.