An exploration of female stereotypes depicted in popular songs 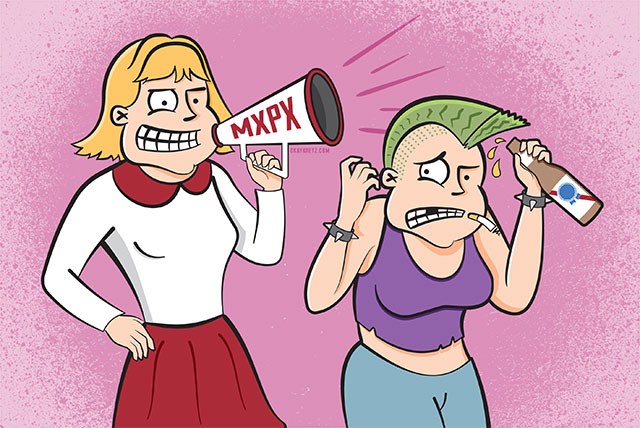 Arguably one of the most well-known women in punk rock isn’t a blue-blooded pioneer like Kathleen Hanna or Exene Cervenka, but the subject of one of the Ramones’ most ubiquitous hits, “Sheena Is a Punk Rocker.” Sheena has also turned up in songs by the Cramps and the Horrors, and is said to be based on the eponymous comic book bad-ass in Sheena, Queen of the Jungle. When we first meet Sheena in song, she has just broken free from discotheques and seen the light (specifically, New York’s big city lights), as the Ramones proudly claim her: “Sheena is a punk rocker now.”

It’s the ambiguity of that “now” that leaves it to the listener to imagine Sheena either as a self-empowered female who acts upon her attraction to the punk rock lifestyle or as a lifestyle chameleon crushing on a Joey Ramone type (do any of them really want to be your boyfriend?). In punk rock songs, you frequently see one or the other, the punk-girl puppet (as in the Dead Milkmen’s “Punk Rock Girl”) or the tough girl who resists your pining (as in NOFX’s “Lori Meyers”).

New love often blinds us to the reality of whether we like someone or whether we want to be like someone. In more mature relationships, there is overlap of the two, ideally each partner influencing the other to expand interests while also continuing to develop existing ones. But immature love seems more inclined to seek itself in others, and that’s almost entirely what’s behind the depicted allure of “punk rock girls” in lyrics by second- and third-wave bands like Blink-182 or New Found Glory. The most attractive quality of these lyrical ladies is commonly that she likes what the singer likes.

But the nice Christian boys in MxPx (or at least their songwriter, Mike Herrera) don’t seem to be looking for a punk rock girl at all. What’s important to them is getting engaged to a face “as beautiful as God’s amazing grace,” (“Andrea,” Life in General), although they may be misguided thinking the way to land her is through “smooth shoes and cool tattoos” (“Chick Magnet,” Life in General). And on the same album, when “Christalena” likes boys (“but not me”), it’s a different tone entirely than the flirtatious rejection found in Screeching Weasel’s “Veronica Hates Me.”

MxPx has always been viewed as a group of amicable freaks on the punk rock scene because of their vocal resistance to the Christian rock label, despite the Christian ideals expressed in their songs. Celebrating the 20th anniversary of their debut album Pokinatcha (a reference to a Snickers commercial; get your mind out of the gutter), MxPx was Tooth & Nail’s soft-spoken response to Green Day’s popularity. The opening track saw Herrera vaguely praying to get through a break-up, “There’s one thing left to turn to. It’s not a girl, and it’s not the world” (“Anywhere but Here”), going the opposite direction from the Ramones’ embittered break-up mantra, “Tomorrow She Goes Away.”

Of course, we all know Joey Ramone’s actual romantic history concludes with his girlfriend Linda preferring his bandmate Johnny, marrying him and driving a wedge between the two “brothers” (although the music went on, till death). But Herrera is happily married, as accounted for in his wife Holli’s rather pedestrian blog, ohhellocupcakeblog.blogspot.com, proving it was possible to land his dream girl, who turned out to be a part-time teacher born and raised in Texas.

On MxPx’s most recent release, 2012’s Plans Within Plans, Herrera humblebrags his romantic success. Songs like “Lucky Guy” see him puffing his chest despite not being a millionaire or having a Ph.D. because “in the end I’ll win her praise.” And although there are the requisite angsty anthems like “Aces Up” and “Best of Times,” it’s clearly pandering to the audience at this point, given the evidence. Whether this is relatable or you identify more with the classic sort of punk love that tends thematically toward an argumentative approach to mutual adoration, we all could probably benefit from the sage advice of Johnny Thunders and try “playing it straight for once” (“I Love You”), either way.