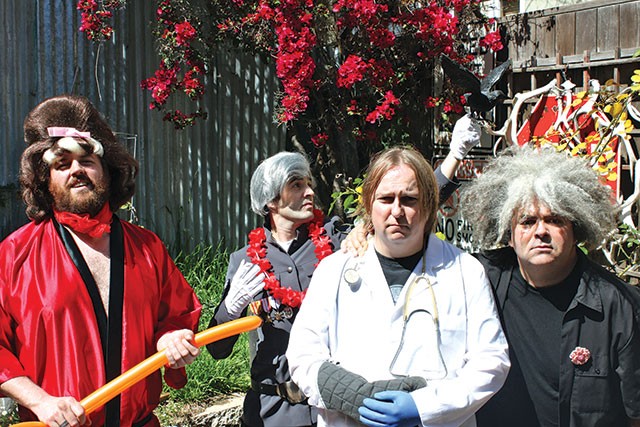 Melvins fans who put on Hold It In for the first time will immediately experience the familiar crush of opening track “Bride of Crankenstein” and brace themselves. Then, after fastening their seatbelts, listeners will wait for the impending plummet as the song shoves you off a cliff when you reach its sudden conclusion. What’s next is unexpected, though: The airy “You Can Make Me Wait” confuses the listener’s anticipation. Instead, our ears are buoyed by a breezy number written by Paul Leary, in which you strain to hear the Melvins pounding in the background, startlingly quiet and reserved.

Hold It In is a mutant beast, a two-headed hydra birthed by a collaboration between the equally experimental (but sonically very different) Butthole Surfers and Melvins. As Melvins frontman Buzz Osborne tells it, the album took a year and a half to come together. It came about after Melvins toured with Butthole Surfers’ Jeff Pinkus and his band Honky (who also joins Melvins on this tour) and Osborne asked Pinkus if he thought Butthole Surfers’ Leary would be into writing an album with Melvins. He was.

“You know, I’ve always been a big fan,” Osborne says. “I think for like 30 years I’ve really liked their stuff. I always liked the stuff that Paul Leary did on the guitar.”

It seems Osborne’s never been afraid to pursue the sounds that intrigue him. In the early ’80s when Melvins first formed, original drummer Mike Dillard didn’t share the penchant for unusual time signatures that Osborne did, and Osborne recognized it. He asked around if anyone knew Dale Crover until Krist Novoselic (who, as grunge history extols, eventually went on to form Nirvana with Kurt Cobain) revealed that he knew Crover. With Novoselic to make the introduction, they headed straightaway to Crover’s house.

“Dale was able to pick up on all the odd timings and weird stuff that I wanted to do,” Osborne says. “Dillard really wasn’t that kind of a drummer. So I knew I had to find somebody else.”

Osborne’s collaborative abilities are at the root of Melvins’ decades-long career, and when he brought Dillard back on 2013’s Tres Cabrones (which saw Crover shift to bass), he says it was a lot of fun to write new material with Dillard’s skills in mind, since Melvins’ sound remains flexible to keep releases and tours fresh.

“It makes things more interesting,” Osborne says. “That might be one reason why it’s worked out for us the way that it has, because we haven’t been afraid to do different kinds of stuff.”

As fans struggle to describe Melvins to the uninitiated, words like “metal,” “grunge” and “doom” get thrown around, but each Melvins record picks up somewhere dependably strange, dropping listeners in foreign territories, and Osborne says that any songwriter who seeks to plug directly into a pre-existing trend probably isn’t very good. He isn’t afraid of labels; he’s just hesitant to stay in one place long enough for you to stick one adequately to his frame.

“I’m not intentionally trying to get away from [one genre], I just never intended to do [one genre],” Osborne says. “I’m a Groucho Marx, meaning I don’t want to belong to any club that would have me as a member.”