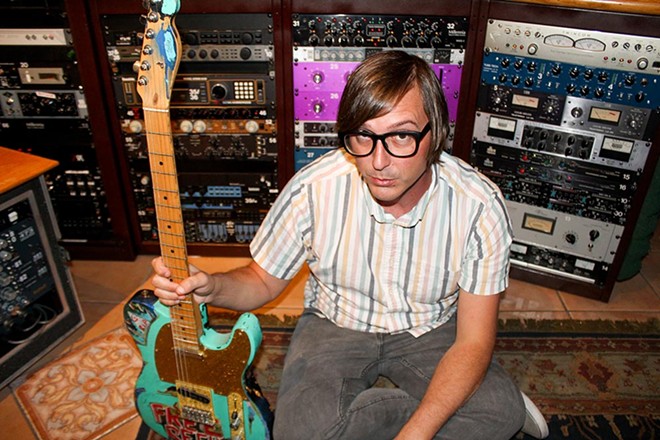 Matt Kamm has long been one of the area’s most colorful freaks, recording mostly under various iterations of the Tele name. But in recent years, he hasn’t been especially prolific. That’s why his latest Tele & the Ghost of Our Lord release is particularly noteworthy. Here, Kamm finally unleashes the pop diva within and goes all Top 40. No, of course that’s not true. Anyone who knows this inveterate weirdo either saw right through that or is currently wiping up the spit take they just did upon reading it.

Still, the new Tele & the Ghost of Our Lord single “Go Back to Bed,” though unquestionably psychedelic, is one of Kamm’s more lucid trips. The spacey pop gem coasts on a dream cloud whirring with retro-futuristic electronic flourishes, but its sonic clarity makes it as distilled and accessible a gateway into Matt Kamm’s surrealist realm as they come. This four-minute Technicolor fantasy now streams everywhere. It’s also available as a name-your-price download on Bandcamp for the collectors out there.


Orlando’s Florida Slang — the indie-pop duo of Jeff Ilgenfritz (Mumpsy, Moonmen from Mars, Luscious Lisa and many others) and Darci Ricciardi — have just released new album Bright Futures on Post Records. I already hinted at the volume of material they’re sitting on when I first wrote about the band last October upon their debut. Just to update the count, this will be their third full-length collection in well under a year. Anyone else feeling like a slack ass right now? Anyway, the nine-song Bright Futures is another well-crafted batch of balmy and sweetly sentimental tunes.

In musical newcomer Ricciardi, it’s clear that Ilgenfritz has found an inspiring new collaborator, one who’s spurred him into an impressive new phase of prolificacy. With songs like the skyward swoon of “Heartbeat,” the album’s latest single, he’s audibly rejuvenated. Bright Futures now streams everywhere.