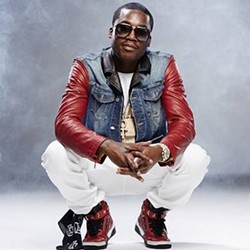 via Meek Mill on Facebook
Some say this beef between Meek Mill and Drake is going to kill Mill's career, so it makes a certain sense that the threat would keep Mill on the Drake defensive, but if his tantrums do end up not just biting him in the ass but swallowing him whole, you might want to say you were there to see it live. Obviously, if you're a fan: Now is the time to show up, especially given the strength of his sophomore release (which was getting the critical nod until he started making people shake their heads).

Whatever side you fall on: Gilt Nightclub is importing the controversial rapper to perform 10 p.m. Sunday, Aug. 23. Info here.

ICYMI: Meek Mill dropped his second studio album, Dreams Worth More Than Money, at the end of June, which features Drake on the track "R.I.C.O." That's the peak of the rappers playing nice, though, as anyone who can roll their eyes knows, a public beef quickly arose after Mill tweeted that Drake was weak for hiring a ghostwriter, Quentin Miller, for the track. Drake responded with diss tracks aimed at Meek Mill, Meek Mill eventually got his diss tracks out, followed by a stream of Drake shots snuck in mostly while freestyling the insults during live performances (and tweets!).