The Attack goes on a six-city, single-day tour to promote their Record Store Day release 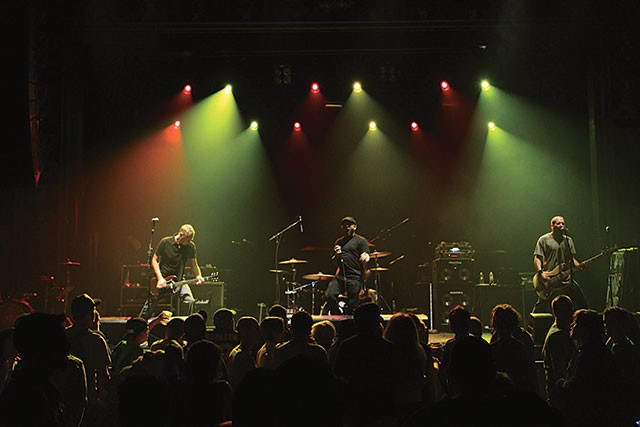 It’s no secret that Florida is a difficult state to tour through. Unless you really are God’s gift to music or your tour van runs entirely on biodiesel and you eat ramen noodles for dinner every night, making the journey down the Sunshine State peninsula can be both a difficult and an unprofitable move.

So when Orlando hardcore-punk quartet the Attack announced they would be touring six Florida cities (Atlantic Beach, St. Augustine, Daytona Beach, Winter Park, Lakeland, St. Pete) in a single day in honor of Record Store Day and to support the release of Rise, Sing, Deliver – their official Record Store Day EP – you can imagine people’s shock and disbelief. April 20 marks the sixth annual holiday devoted to vinyl music, and what better way to celebrate than by performing at independent record stores in Florida?

“When we call up some of these record stores to tell them what we’re doing, they have to ask again, ‘What are you doing? Holy shit, that’s amazing,’” lead vocalist Charlie Bender says.

The band is no stranger to the punk-centric DIY ethos, and Bender and guitarist Brad Palkevich are also co-founders of the local indie screenprinting business Enemy Ink, which prints fliers, posters and T-shirts for bands. Overall, they seek to support fellow independent musicians and business owners in everything they do. The band fervently talks about their desire to uplift the music scene not only through their music, but also through their support of local businesses – especially, it seems, record stores, during this ambitious single-day tour.

“That’s about as DIY, grass-roots, get-in-the-van type thing that you can try and do in one day,” says bassist Mikey Cortes, who also works at Park Ave CDs, where many will flock for exclusive RSD releases.

The Attack had a busy 2012, touring with the Misfits, opening for Bad Religion and Rise Against, and releasing another EP. They admitted there was a gap in their early 2013 spring schedule that they didn’t exactly know how to fill, but luckily, Palkevich connected with Michael Kurtz, one of the seven individuals who founded the holiday, and got Rise, Sing, Deliver to be counted as an official Record Store Day release. The Attack purposefully chose the EP title in homage to the holiday, making it an acronym for the name.

“We are where we are now because of places like independent record stores,” Cortes says. “And this release is a celebration of that.”

Since this national holiday is devoted to physical delivery of music, the band is more likely to attract fans who actually care about vinyl as a medium, and the Attack recognize this, hoping to connect to the music lovers who actually “give a shit” in the stores they visit.

This year, Record Store Day will be a win-win for all, but a long, long day for the Attack. Catch them in the thick of it when they perform at 2 p.m. at Park Ave CDs.