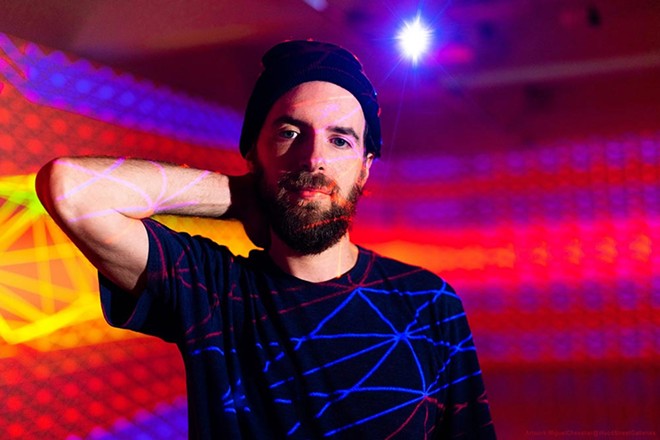 Greg Gillis, better known as Girl Talk, is on tour and will make a stop in Orlando’s Beacham this Thursday. It’s been a long 14 years since he last played the City Beautiful, and the venue where he last performed, Club Firestone, is no longer Club Firestone.
But Gillis is still Girl Talk.

“I feel like I’m still trying to tap into a similar energy to where it was 15 years ago. To me it’s like, I’m gonna go 100 percent from the start to the finish. … I hope people kind of wanna come with me on the ride,” says Gillis.

“I’ve seen it all from, you know, early days of playing to audiences who don’t care and you’re kind of like going to war with them, to playing shows where everyone’s there to have fun, and it’s this community celebration sort of vibe.”

A Girl Talk show is most definitely a community celebration. A sweaty, joyful groupthink prevails, and the only escape is to leave the building. But who would want to do that? Gillis establishes a mood, acting as a wild-eyed ringmaster, and looks to his audience to vibe with him however and wherever the spirit takes them.

In 2014, Pitchfork painted this picture of the Girl Talk live experience: “Girl Talk’s music is the gushing id of dilettante culture, a glutinous ball of disparate pop songs mashed together so you only taste the sugar.”

The thing is, what makes his mashups so pleasing is that they do not live only on the surface. Yes, they trigger recognition and joy among fans of all genres as the monster hits Gillis chooses are presented in a new light. But the mashups themselves are complex and compel the listener to take a journey into the unknown.

“So I got a degree in biomedical engineering. And then I had a job basically from 2004 to the summer of 2007. I think there’s something to … the meticulous nature of the music and just physically … sitting in front of a computer and trying stuff out.

“It’s very similar to working in science or engineering where you’re working on these small data points or just getting into these, you know, crazy amount of detail. There’s a connection there,” muses Gillis. “I grew up on stuff like Kraftwerk and Devo and things like that, where there is this kind of like, science-ish aesthetic to a lot of it.”

The creative evolution of Gillis includes a solid foray into production. He made a song, “Believe in Magic,” with Jim Jones from Dipset in 2011. His 2014 mini-album with Freeway, Broken Ankles, was very well-received. Lately, he’s been going into the studio and collaborating with artists more often, and this year released an album, Full Court Press, with Wiz Khalifa, Smoke Giza and Big Krit.

Has all this activity shaped Girl Talk’s live shows in any way? Maybe, maybe not.

“Touring now, it’s fun in that it feels like a retrospective of the past 20 years of work for me, where I’m playing older material,” says Gillis.

“I’m playing new stuff, and it’s just been years and years of kind of working on this material and trying to come up with something that in the live setting is something that can be intense and fun for an extended period of time.”